City of Milford Announces Employee of the Month

Details
Published on Thursday, 25 February 2021 09:11
Written by City of Milford 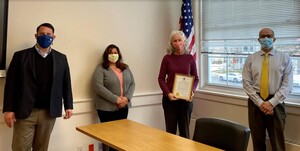 Treasurer/Payroll Administrator with the City’s Finance Department for being selected as Employee of the Month for February 2021.

As the recipient of the award for the Mayor’s Employee of the Month Program, please join us in extending a warm congratulation to Marianne in receiving this recognition. After a review of all of the nominations, the Selection Committee unanimously chose her as the winner for her teamwork, strong leadership, dedicated service, outstanding work ethic, and willingness to always go above and beyond expectation.

Marianne has a vast array of responsibilities, some of which are maintaining the city’s banking accounts, investment accounts, bond projects, financial transactions, and overseeing all aspects regarding the city payroll system in accordance with the appropriate Federal, State, and Local laws and appropriate union contracts.

Marianne became Acting Treasurer while the city was in the throes of integrating the Munis HRIS/Payroll conversion. Marianne didn’t miss a beat and leaped right into the project. Her sense of calm carried through the countless hours helping to build and test the system. Her expertise navigating Excel proved to be invaluable due to the amount of data that needed to be checked and triple checked before moving it into the new system.

Marianne is always willing to assist her fellow colleagues and does so with a very pleasant demeanor. Her kind, friendly and approachable manner is greatly appreciated by all. These are just a few of the many reasons the Mayor extends his sincere congratulations and appreciation to Marianne for the outstanding attributes she exhibits as Employees of the Month.