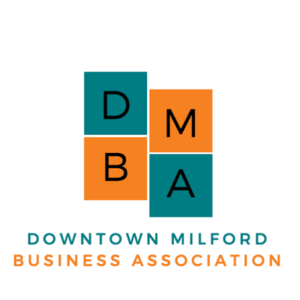 The Downtown Milford Business Association announced the annual winners of the DMBA Awards, which honors small business owners and members of the Milford community to celebrate their unique milestones and exemplary service to the city.

This year’s winners include:

- Buddy Prete of Ultimate Interiors, who received the DMBA Downtown Milford Champion Award for his outstanding commitment to his community. Mr. Prete has been a part of the DMBA for many years, during which he has offered guidance, shown leadership, fostered beneficial relationships, given freely of his time to help in any way. Mr. Prete is also apart of many other organizations and is well-known for tirelessly working to make Milford a better place.

- Amir and Michelle Lebel of The Corner Brunch, who received a DMBA Award for 20 Years in Business. Over the years, The Corner Brunch has accumulated a list of accolades, including Top 19 Brunch in the country by Travel & Leisure, and Best Brunch in CT in People. On top of helping to draw a spotlight on Downtown Milford through their publicity, the Lebels have donated tons of meals to frontline workers during the pandemic, are committed to community growth, and put their hearts in everything they do.

- Barry and Rosemary Gordon from The Gilded Lily Gallery, who received a DMBA Award for 20 Years in Business. The Gilded Lily Gallery is renowned for its unique collection of both local and international art and is a champion of supporting local artists. Ms.Gordon is well-known for her multimedia works across a variety of mediums, and Mr. Gordon is a talented photographer whose work also hangs in the Gallery. In 2020, Mayor Blake programed September 23rd Guilded Lilly Gallery Day in the City of Milford. The Gilded Lily Gallery attracts visitors from around the state and beyond and is a beloved fixture of the Downtown Milford landscape.

- Gary Johnson of the Unity Way of Milford, who received a DMBA Community Service Award. Mr. Johnson has served the United Way of Milford for 43 years as President and CEO. Over the years, he has worked tirelessly to get help to those in need, providing a much-needed safety net to many members of the Milford community. As such, Mr.Johnson’s efforts have had a profound effect on the lives of many.

- Paige Miglio, Executive Director of the Milford Arts Council, received a DMBA Community Service Award. Ms. Miglio has been the ED of the MAC since 2013, during which time she paved the way for an artistic renaissance in the Milford Community, supporting local artists, bringing culture and entertainment to the Downtown landscape, and proving that the arts are an integral part of our vibrant community. A talented artist herself, Ms. Miglio has worked tirelessly to make the MAC both a household name and a pivotal part of our city.

In non-pandemic years, the DMBA Awards are given at an in-person ceremony. This year, the awards were given out individually. To see the awards being given out, go to https://www.facebook.com/DowntownMilfordBusinessAssociation