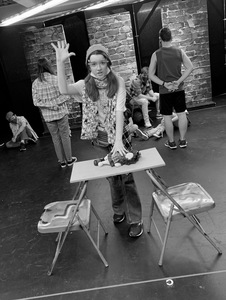 “Runaways” is a collection of songs, dances, and spoken word pieces about children and teens who have run away from their homes. Initially created from interviews with homeless children and those in orphanages, Swados weaves songs about personal struggle and the world at large through the eyes of youth in New York City in the ’70s. The show blends different musical styles, from pop to hip-hop and jazz to reggae, while asking why children can’t remain children.

“We’re excited to share this rarely-performed musical with our Teen Theatre actors,” said director Bert Bernardi. “The cast is delivering heartfelt, poignant and riveting performances as they connect with the dramatic material.“ Co-producer Jimmy Johansmeyer added “The composition of this show allowed us to safely rehearse the show in small groups.”

Due to COVID protocols, performances are not available for general public viewing and will only be seen by a limited number of family members.

Sponsored by The Milford Bank, the musical is produced through special arrangement with Concorde Theatricals, NYC.

Pantochino Teen Theatre allows young actors the opportunity to work with professional directors and designers outside the academic setting, on a schedule matching that of professional theatre companies. “Runaways” has been cast, learned and rehearsed in an immersive ten rehearsals. Bernardi directs the show with Justin Rugg as musical director and Becki Arena, choreographer. The design team includes Jimmy Johansmeyer (costumes), Teddy Carraro (Sound) and Von Del Mar (sets).