Meet City of Milford Employees of the Month! 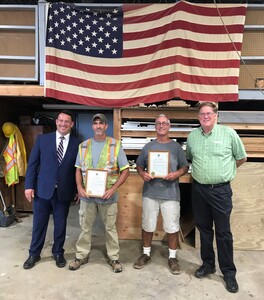 Congratulations to Robert (Bob) Trapp and Keith Doyle Signs & Lines Crew in the Highway/Parks Division within the Department of Public Works for being selected as Employees of the Month for July 2021.

As the recipients of the award for the Mayor’s Employee of the Month Program, please join us in extending warm congratulations to this team in receiving this recognition.  After a review of all of the nominations the Selection Committee chose this team from the Highway/Parks Division as the winners for their teamwork, strong work ethic and unwavering sense of duty and loyalty to each other as well as those they work with.

Bob began his employment with the City of Milford on November 29, 1993 when he was hired as a Truck Driver-Drainage.  He was promoted on July 22, 1998, to Striper/Truck Driver, and, on March 30, 2001, he was once again promoted to his current position of Working Leader-Street Marking.  Keith began working for the city on March 10, 1997, in the position of Building Custodian.  On May 4, 1998, he was promoted to Maintainer; promoted on November 14, 2005, to Truck Driver/Laborer; promoted on January 4, 2010, to Truck Driver; and then on February 1, 2010, to his current position as Street Striper.

Bob and Keith are essential to keeping the community safe.  Working closely with the Police Department, they are responsible for the placement of all fire lanes, no parking zones, parking time limitations, stop signs and speed control signage.  Because there is no room for error in their workday, each task Bob and Keith perform is done with conscientious accuracy to ensure all guidelines and standards are met.  They are always available for a quick last-minute job and are unflappable when there is a change in a job they are completing.

Bob and Keith work together like a well-oiled machine.  Their production line is always meticulous, their shop is clean and organized.  Their affable natures are evident in their interactions with each other and all with whom they come in contact. Bob and Keith are well deserving of being recognized for the efforts they put forth each and every day.  Their positive attitude, excellent team spirit and commitment to serving the public are unparalleled.  These are just a few of the many reasons the Mayor extends his sincere congratulations and appreciation to Bob and Keith for the outstanding attributes they exhibits as Employees of the Month.

Again, congratulations to them!