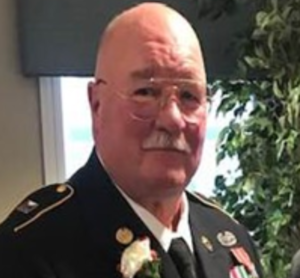 I graduated from Cheshire High School in 1969 and enlisted in the Marines. I spent most of my active-duty time in the Pacific serving three-plus years in, Hawaii, Okinawa, Hong Kong, Taiwan, The Philippines and some time in Vietnam.

My main unit was the 12th Marines Artillery Regiment, Third Marine Division.
I was honorably discharged as a Sergeant in July of 1973. I then spent two years in the Marine Reserve.

I was a Police Officer in the Town of Cheshire from 1974 to July 1985 retiring at the rank of Lieutenant.

In 1989 I joined an Army Reserve Drill Sergeant unit and after two years I transferred to the 143rdMP Co, Connecticut Army National Guard. During that time, we deployed on humanitarian missions to Panama and the Dominican Republic.

Following 9/11 the unit was activated for a series of security missions at the airports and other locations. This ended May 30th, 2002.

In February we were reactivated for the mission in Iraq. From April 2003 to April 2004, we were stationed in Western Baghdad providing security and rebuilding the Iraqi court and law enforcement system.
In April, 2005 I retired. During my time with the National Guard in the Military Police I held every position from machine gunner to First Sergeant.

I have graduated from numerous Military Police Schools, the Connecticut Municipal Police Academy, and The FBI National Academy. I hold a Masters Degree in Criminal Justice from the University of New Haven.

My awards include The Bronze Star, Combat Action Badge, Valorous Unit Citation, and eighteen other awards and recognitions.