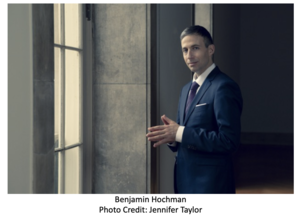 Bridgeport, CT - After a spectacular season premiere concert on September 10, the Greater Bridgeport Symphony (GBS) begins the process of auditioning a successor to replace beloved Music Director Eric Jacobsen, who will be stepping down from his role with GBS at the end of this, his ninth season, on April 8, 2023.

Between now and the season closer, three concerts will showcase conductors hand-picked by Jacobsen to be his successor.   The genesis of GBS’ season theme Turn, Turn, Turn will become apparent when Benjamin Hochman takes the helm but also solos on November 12, 2022 at The Klein in Bridgeport with the First Turn.  He will conduct Schumann’s lush “Symphony #2,” often cited as a testimonial of triumph over difficult times.  Hochman is also a gifted pianist, and will himself solo, while conducting Beethoven’s “Piano Concerto No. 1” which he calls  “a work that combines virtuosity, lyricism, charm, and humor.”  A very special addition to the program is a modern piece, Sinfonietta No. 2, "Generations": II. Alla sarabande by an African American composer, Coleridge-Taylor Perkinson, written in 1996.

The New York Times, which has been writing about Hochman for years, says he plays with “…stylistic insight, elegance and sparkle…” while theBoston Globe says he has a “…fluid style and disarming natural grace.”  Hochman is a musician of exceptional versatility who regularly appears in multiple guises as orchestral soloist, recitalist, and chamber musician. In recent years he has ventured into the orchestral repertoire as a conductor. His wide range of partners and projects is matched by his curiosity, focus, and ability to communicate deeply with audiences.  Since his Carnegie Hall debut as soloist with the Israel Philharmonic under the baton of Pinchas Zukerman, Hochman has enjoyed a large international performing career.  Currently based in Berlin, Germany, Hochman is “thrilled to make music this November with the musicians of the Greater Bridgeport Symphony. I’ve heard wonderful things about the orchestra, including from Eric Jacobsen. It’s always meaningful to work with an orchestra for the first time, especially with a program of such inspired music.  I am excited to bring to Bridgeport my passion for music, along with curiosity and openness for fresh and inspired collaboration.”

Turn, Turn, Turn continues December 17 when Chelsea Gallo conducts an evening of Tchaikovsky.  Then on March 18, Chelsea Tipton II will return to GBS after two summer concerts to conduct Beethoven’s Symphony #7 and the Dvořák Cello Concerto with soloist Sterling Elliott.  Also in the running is conductor Eduardo Leandro, who performed Beethoven’s Symphony #5 with GBS in November 2021.

“It’s a bittersweet year for GBS, saying goodbye to Eric and hello to a new conductor, but we are all excited at the choices and possibilities before us,” says Executive Director Mark Halstead.  “Eric leaves big shoes to fill, but we are confident that one of these four candidates will be able to take up where Eric leaves off.”  A committee has been formed, and surveys of musicians and concertgoers will be taken.  “Musicianship is the key,” says Committee Chair Dr. Gary Hermalyn.  Whatever the result, the season will be filled with variety and style.

Tickets are available now ($65-$54-$43-$32-$18) while partial subscriptions are still available at 20% off full admission price  ($208-$173-$138-$102-$58 for four concerts).  For those who purchased single tickets for the opening concert, their purchase can be credited to a full-year Gold Subscription, which entitles the subscriber to one free ticket (per seat purchased) which can be used at any concert this season. Tickets are on sale at www.GBS.org or by calling (203)576-0263.