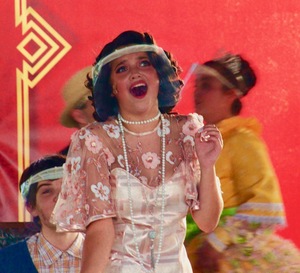 Pantochino Productions Inc., Milford's professional, not-for-profit theatre for family audiences, successfully brought live musical theatre back to Downtown Milford with it's Teen Theatre production of "The Drowsy Chaperone" for two performances at the Rotary Pavilion in Fowler Field. The production was sponsored by The Milford Bank.

Following protocols from the CDC, ReOpen Connecticut and the Milford Board of Health, Pantochino continued its tradition of providing young actors age 12 to 18, the opportunity to work with professionals in learning, rehearsing and performing a fully realized production outside of the school or academic setting. The twenty-eight young actors rehearsed the show at an accelerated pace over two weeks in the company's studio space in the Connecticut Post Mall.

"This was an against-all-odds production," said co-producer and director Bert Bernardi. "Despite facing so many hurdles along the way, we met every challenge and jumped through every hoop to keep this program alive for our young actors. They needed this. We all needed this."

Originally set to be performed at Milford Arts Council, The MAC, the company switched gears to meet all safety protocols and secured the outdoor venue. The performances were limited to family members only who were sat twelve feet away from the performers, and six feet apart from other families. The cast wore face shields provided by the Milford Regional Chamber of Commerce throughout the show for optimum protection.

"We not only met each safety protocol, we exceeded it," Bernardi added.

"The Drowsy Chaperone" is the 2006 Broadway musical with book by Bob Martin and Don McKellar, music and lyrics by Lisa Lambert and Greg Morrison. The show was produced through special arrangement with MTI (Music Theatre International).