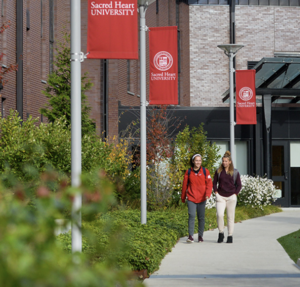 FAIRFIELD, Conn.—The Sacred Heart University community is showing great support for a new initiative, SHU Shares, that combats food insecurity on campus and ensures students remain well fed and focused on their academic and professional goals. In mid-March, when organizers began accepting donations for SHU Shares, University trustees, alumni, faculty and staff contributed over $27,000, and SHU students donated more than 1,000 meals from their own meal plans.

Food insecurity—lack of food due to money problems or limited resources—affects nearly half the college students in the United States, according to a 2019 study by Temple University’s Hope Center for College, Community and Justice. Through SHU Shares, anonymous donations can be made to students who are struggling with food insecurity. Those who need help obtaining meals can make confidential requests online, and meals are then added to the student’s SHU identification card, which they swipe when paying for food. The students can even swipe their cards at SHU’s most popular dining halls on campus—63’s and Linda’s—for meals during the day.

Students who have been promoting SHU Shares said their friends and roommates responded positively to the program, and many had been unaware that food insecurity was affecting their peers. They said their fellow students have been happy to donate some of their meals for others in need.

“I’m glad we started the program,” said Grace Sullivan, a junior majoring in health science. “No one has to feel embarrassed if they need food.”

SHU Shares enables a student to step away from budgeting for their next meal or worrying about finding food. Instead, students can focus on their studies and spend time with friends. Sullivan said not having enough money for food is very stressful, and SHU Shares eliminates the stress. “It gives students comfort,” she said.

Cara Pezzino, a graduate student who works for SHU’s dining services, recognizes that paying for food is a problem for some students. “It’s an uncomfortable situation when meals or food aren’t available,” she said. With SHU Shares, she added, students who are struggling now have somewhere to turn.

Sabrina Yee, a health science major, believes SHU Shares is in sync with the University’s mission, and she hopes the program reduces the stigma around food insecurity. “SHU Shares lends a helping hand to whomever is in need of food on campus,” said Yee, a senior.

Bruce Tully ’73, president of SHU’s Washington, D.C., alumni chapter, said that when he learned about the SHU Shares program, he knew he had to contribute. He also helped garner support from other alumni.

Tully said he wants SHU students to be supported. He recalled being a broke college student working several jobs and hardly having enough money for three meals a day. If SHU Shares existed in the 1970s, he said, he would have taken advantage of it. “If it wasn’t for my Sacred Heart degree, I wouldn’t be where I am or who I am today,” Tully said. “It’s all about giving back.”

Douglas Wade ’77, owner of Wade’s Dairy in Bridgeport, also supports SHU Shares. For years, Wade has conducted food drives to help local families. He is not surprised that SHU students face the same problems as many families in nearby communities. “I see it all the time; just because a young person is going to college doesn’t mean they don’t suffer from food insecurity,” he said.

Wade thinks the SHU Shares initiative is a wonderful way to help students anonymously. “Recognizing a problem and finding a solution is a great thing,” he said.

For more information or to donate, visit the SHU Shares website.