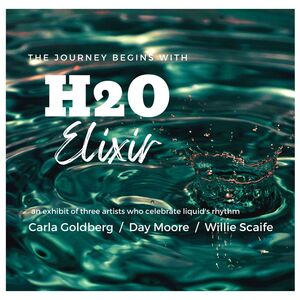 The Milford Arts Council’s Firehouse Gallery presents a Pop-Up Visiting Artist Series. This exciting new series utilizes the MAC’s gallery space in Walnut Beach to support artists by providing opportunity to exhibit and sell their art, curating their own presentations for a three-day pop-up exhibit (for single artists or small groups, up to three artists) as a low-cost rental. These exhibits are scheduled through the MAC (visit: milfordarts.org) and based upon gallery availability.

The MAC is excited to announce the first in this series: The Journey begins with H2O Elixir

Artists Carla Goldberg, Day Moore and William Scaife share a common thread in their water centric artworks; the fluidity of line, brush and motion. Each has their own unique processes. Day takes reality as inspiration from GoProHero photographs of the underwater surface and produces abstracted views in paint on canvas with a definite environmental message. Carla takes the obsessive act of drawing micro polka dots on plexiglass to depict the passage of time and create a watery light and shadow filled dimensional experience. Willie uses a liquid state and natural forces of air and gravity to express flow on canvas.

Carla Goldberg earned her MFA from MICA Mount Royal Graduate School of Art. She is a mixed media artist, independent curator and former director at Skylight Gallery NYC and Beacon Artist Union. Originally from California, she lived and worked in NY to pursue her career in art. She is the 2014 Connecticut “Sea Grant” recipient, a partnership between UConn and NOAA. It is this yearlong study of the Long Island Sound that inspired her Seafoam Sculptural Drawings and led to her move to Milford to build her new studio by the ocean that inspires her obsession with water.

Carla’s series of sculptural drawings are memory based images on plexiglass of sea foam on water surfaces. The ink she uses cannot be erased so every mark must be placed mindfully. The pieces develop organically over the course of months as she draws on both sides of the plexi panel, then paints resin inside the drawn shapes adding texture by drawing into the resin patterns with brush, stick and fingers. In the final artwork, drawing becomes sculpture as light passes through her work, projecting light and shadow on the painted panel behind.

Carla exhibits and curates internationally and has been featured in New York Magazine, Studio Visit Magazine, the Film "New School: A Hudson Valley Artists Profile" and BBC Radio Free Asia for her project Freedom & Art. Her larger Public Installations can be seen at The American Embassy, Ankara Turkey, The Marriott Marquis Waikiki Beach, The Children’s Hospital in Cincinnati and Boston, The outdoor solarium on Royal Caribbean Cruise Lines “Harmony of the Seas” and the permanent collection at Southwest Minnesota State University Art Museum.

Painter, designer, environmentalist, and entrepreneur. Day earned a B.F.A. from Rhode Island College. She has worked as a painter on large-scale theatre scrims and for Sotheby’s as a restoration artist. Day considers herself an “artivist” and is the founding member of Vanishing Marine Murals and Sculptures and SeaWall_Art4aPurpose, which create temporary murals and sculptures made from natural materials meant to be taken back by nature or tide and spotlight vanishing species. Day’s philosophy and practice promotes the idea that “urgency” and “action” are what is needed concerning the conservation of our oceans. Through dialog & education we can raise awareness about what it would mean to lose the oceans.

Day’s current studio work continues her ongoing colloquy with the sea. Exploring the idea of abstracted perception through photos taken while ascending to the surface of the water. Using a GoProHero to photograph the underside of the “skin of the sea”, then heading into the studio to paint the results. Under the sea, looking up, once familiar images become otherworldly and unrecognizable at the whim of current or wind. Fractured, shattered and reconfigured: Is it an overturned life raft, contents spilling out, plastic trash floating on the surface or an idyllic beach replete with coconut palms? Day also donates a percentage of each painting sold to Sea Shepard Conservation Society. Her art can be found in galleries and homes in Europe, South and Central America and the U.S.

Day is member of Silvermine Artist Guild and several other artist’s collectives. She has also worked with the United Nations and University of Peace in Costa Rica on a woman’s empowerment exchange project and received several awards for her work in the sustainable / green industries, such as the prestigious Eileen Fisher Woman Entrepreneur
Grant.

Willie Scaife is a fine art painter specializing in abstract art and multimedia and is an active member of The Arts Alliance of Stratford. Willie is a New Jersey native, but landed in the city of Bridgeport, Connecticut where he studied business at the University of Bridgeport. He also has a degree in interior design which he applies to his designs for mid-century furniture and creates content for clothing featuring his paintings incorporated on the fabric.

Willie works with acrylic on canvas as well as alcohol and acrylic inks on synthetic paper. His art does not attempt to represent external reality. Instead, he chooses to achieve its effects by using color, shapes and forms to capture the energy of color through his creative process of fluidity and symbolism. Colors flow, meet and mingle, creating pattern and texture driven by patience, and natural forces within the environment he creates in. The flow in essence is in synch with the actions of water within pigment.

Willie’s interest in art is life long, having started in elementary school where he painted his first murals. His paintings and designs have been bought, viewed, and displayed in many private homes and businesses throughout The United States and beyond.