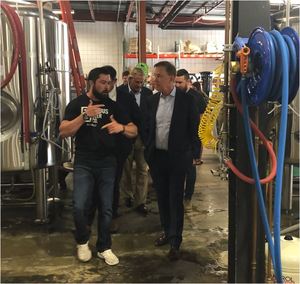 Most notably, the measure gives craft breweries the ability to sell more beer to customers for consumption off-premises, allowing these small businesses to expand their market share.

Under prior law, craft breweries in the state could only sell up to nine liters (about 1 case of 12-ounce cans) to an individual over 21 within one day. The legislation Governor Lamont signed increases the limit to nine gallons, or about 4 cases of 12-ounce cans.

The legislation, which has been largely applauded by those in the industry, also contains several other provisions designed to support the growth of Connecticut’s craft breweries, including:

·         Consolidating the four beer manufacturer permits – beer, brew pub, beer and brew pub, and farm brewery – into one permit, helping to streamline the administration of these permits and level the playing field within the industry;

·         Creating a Connecticut Craft Café permit, under which all manufacturing permit holders will have the ability to sell all other types of alcohol manufactured in the state. For example, wineries, cideries, and distilleries will be able to sell Connecticut craft beer, introducing Connecticut products to an even greater consumer population; and

·         Allowing craft breweries to hold multiple manufacturing permits so they can also make wine, cider, spirits, and mead all under one roof.

It also contains other improvements that support the liquor industry as a whole, including:

·         Combining a number of permit types that will eliminate dozens of permits and streamline the fee structure so that there is far less confusion for small businesses looking to enter the marketplace;

·         Increasing the number of gallons manufacturers of distilled spirits can sell annually from 25,000 to 50,000 gallons, and doubling the daily amount they can sell to individuals from 1.5 liters to 3 liters;

·         Creating an out-of-state retailer shipper’s permit so that consumers can purchase wine from out-of-state for wine not available in Connecticut; and

“Consumers are continuing to show with their spending habits that they would much rather purchase locally manufactured beer and wine, and our outdated blue laws should not impede the ability of these small businesses to benefit from this growing demand,” Governor Lamont said. “This long overdue law that I’ve signed helps level the playing field and supports Connecticut brewers and farmers. There’s so many breweries and vineyards in Connecticut, and we should be doing everything we can to support them.”

A report released by the Connecticut Department of Labor last month showed that employment in the state’s craft brewing industry, which includes microbreweries, brewpubs, regional craft breweries, and contract brewing companies, soared from less than 15 in 2010 to nearly 800 in December 2018.

The governor expressed his gratitude to the legislators who built a consensus among the General Assembly to adopt the bill, noting that it received broad, bipartisan support.

“This law drags the entire liquor industry in Connecticut into the 21st century,” State Representative Mike D’Agostino (D-Hamden) said. “It is pro-consumer, pro-business and pro-Connecticut.”

“I am very proud of the work that has gone into this piece of legislation,” State Senator Kevin Witkos (R-Canton) said. “Modernization of the Liquor Control Act was long overdue, and this new law will ensure that our craft brewers, distillers, wine producers, and associated entities will be able to continue growing and adding to our economy. By streamlining the number of permits from over 40 to 12,  and allowing establishments to sell each other’s Connecticut made products, this bill will help support these important economic drivers. It is important that state government remain aware of the needs of our industries and respond accordingly when needs aren’t being met. I am thankful to my colleagues on the General Law committee, the Department of Consumer Protection, and the many stakeholders impacted by this bill for their hard work and collaboration – and to Governor Lamont for his support of the bill.”

The legislation is Public Act 19-24, An Act Streamlining the Liquor Control Act.

The provision of the bill allowing breweries to sell more beer for off-premises consumption went into effect immediately upon receiving the governor’s signature. Other provisions of the bill go into effect at later dates.