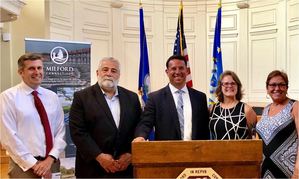 Mayor Ben Blake announced today that Milford has met the State requirements for a moratorium allowed under § 8-30g of the Connecticut General Statutes.

During the moratorium (effective until August 20, 2023, with eligibility for another extension to August 20, 2028), Milford will no longer be subject to the harshest elements of the State’s affordable housing law which allows for abuse by predatory developers who threaten to bypass local zoning regulations for monetary gain.

Mayor Blake celebrated the moratorium as a “WIN FOR MILFORD” as the “moratorium returns control of planning and development to the City, pushes back against over-development, and halts predatory development.”

This achievement was the result of hard work and a collective team effort.  City leaders conducted an exhaustive canvass of housing units across Milford, laboring non-stop to prepare, document, and submit the City’s Certificate of Affordable Housing Project Completion.

Mayor Blake stated, “I’m very proud of the tremendous efforts by the entire group who contributed to our successful application for the moratorium.  I want to thank our local City leaders and our State delegation, past and present, for their efforts advocating for long overdue improvements to the Affordable Housing Act, as well as helping to secure the moratorium.”  Mayor Blake added   “a very special thank you to former Senator Gayle Slossberg and Representative Kim Rose, who were Chair and Vice Chair of the Housing Committee which spearheaded efforts to correct some of the flaws found in Connecticut’s affordable housing law, bringing greater consistency and fairness to the process.”

The moratorium demonstrates the great lengths Milford has gone to create affordable housing for young professionals, working families, and our senior population.  The City supports the original intent of CGS § 8-30g – to provide housing to those wishing to reside in, and be part of a community otherwise not affordable.  Milford has been afflicted, however, by the unintended consequences of the well-intentioned legislation.  Developers have circumvented carefully crafted, purposeful zoning regulations to maximize profits.  With this moratorium, these predatory developers will no longer be able to ignore the sound planning principles important to the success of Milford.

Mayor Blake concluded that, “the Small City with a Big Heart will continue to be a world-class community, with lots of New England charm, where every citizen has the opportunity to live and prosper.”