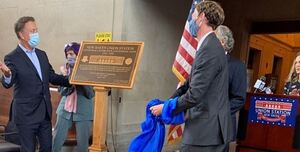 Governor Ned Lamont today joined federal, state, and local leaders at a ceremony commemorating the 100th anniversary of the opening of Union Station in New Haven, during which his administration signed a letter of intent with the City of New Haven establishing a new partnership agreement designed to launch “a new era in managing the (two) State of Connecticut-owned rail stations in New Haven.”

“Union Station is as alive today as it was a hundred years ago, and few stations in the country are as magnificent as this one,” Governor Lamont said. “For the last hundred years, this station has served as a central transportation hub not only for Connecticut, but for the entire northeast, and I am determined that we renew its mission and prepare it for success throughout the next century.”

Originally opened on April 5, 1920, Union Station is listed on the National Register of Historic Places. It was designed by noted American architect Cass Gilbert and includes ornate ceilings, elegant chandeliers, a grand clock suspended from the ceiling, and long oak benches in the cavernous grand hall that is brightly illuminated by high, arched windows. The railroad station connects the New Haven Line running into New York City, the Hartford Line heading north to Hartford and Springfield, and Shoreline East, which goes east to New London. It is also one of the key links on Amtrak’s Northeast Corridor, from Boston to Washington and points beyond.

Today’s ceremony was originally planned to be held closer to the actual anniversary in April, but was postponed several months due to the ongoing COVID-19 pandemic. Governor Lamont and other officials praised the hard work and dedication of transit workers on the front lines and behind the scenes as Connecticut continues working through the ongoing pandemic. The event included the unveiling of a bronze plaque commemorating the station’s centennial.

Under the letter of intent, a new lease and funding agreement will be established between the Connecticut Department of Transportation and the City of New Haven to last 35 years, with two ten-year extension options, that will allow the city (through Park New Haven) to lease and operate the Union Station Transportation Campus and staff the partnership. Plans call for the revamping of the basement, first, and second floors of the station to allow for new retail options; and improvements to stairs, elevators, and escalators that will enable future adaptive reuse of the upper station floors and public restrooms. In addition, the agreement will establish an executive oversight panel consisting of the Connecticut transportation commissioner and mayor of New Haven that will be responsible for strategic planning, annual budget direction, major issue resolution, and redevelopment of the station campus.

“New Haven’s Union Station is one of Connecticut’s architectural jewels.” Lt. Governor Bysiewicz said. “Its rich history and its ability to continue providing reliable service to millions of people – both local commuters and visitors from around the globe – is what makes Union Station a true treasure. As we proudly celebrate its centennial, we also thank the transit workers across our state for their dedicated service.”

“A railroad station connects us and keeps us moving forward,” Connecticut Transportation Commissioner Joe Giulietti said. “This one tells a story. It is the story of a railroad system that has come through New Haven for more than 150 years. For the last 100 years, Union Station has been a familiar, welcoming junction where literally millions of people have embarked on journeys and come home again.”

“While in this midst of this unprecedented crisis, it’s important to take a moment to step back and think about our history,” Mayor Elicker said. “Today we are not just celebrating the 100th anniversary of Union Station – we are celebrating the important place this building holds in the history and life of New Haven. It is one of the busiest rail facilities in Connecticut, on the busiest rail line in the United States – transporting 125,000 passengers weekdays and 40 million a year – and generating nearly $50 million of annual revenue into our local economy. Union Station is so much more than a building, it is a gateway to our great city and a centerpiece of its evolution in the century to come.”

“Union Station holds a special place in my heart,” Congresswoman DeLauro said. “I am lucky to have grown up just down the road in Wooster Square, traveling back and forth through the station’s Grand Hall every day to get to school at Lauralton Hall. I especially adored the model trains on the long benches. I still do to this day as I pass through – too many times to count in the past 30 years on my way to Washington or coming back home. My thanks go out to all the workers who keep Union Station running every day – especially those declared essential at this difficult time.”

“Union Station is a historic treasure and pivotal transit hub — powering economic development for the entire state,” Senator Richard Blumenthal said. “Millions yearly start or finish personally momentous journeys there, with memories that make this station historic in their own lives. I’ll continue fighting for federal investment in rail transportation, making Union Station all the more important in the next 100 years.”

“For 100 years, Union Station has been a cornerstone for transit in Connecticut,” Senator Chris Murphy said. “This magnificent hub has kept riders in New England moving for a century now. I’m excited to see what the future brings.”