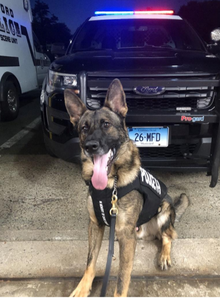 The Milford Police Department’s K9 “Tyson” has been awarded a ballistic vest thanks to a nonprofit organization, Vested Interest in K9s Inc.

K9 Tyson is a 2 year old German Shepherd, certified in Patrol work, and assigned to Officer Kevin Hilliard of the Milford, Connecticut Police Department. K9 Tyson became a member of the Milford Police Department in December 2019 upon graduating from the 208th, Connecticut State Police Patrol Dog Class. During training K9 Tyson learned obedience, tracking, evidence recovery, and handler protection. While not working, K9 Tyson enjoys going for walks, playing with his “chewy” and wrestling with his K9 brother Nash.

Tyson has already lived up to his name as shown by his tenacious and persistent attitude. He even paws at the speed bag when hanging out with Officer Hilliard in the gym.