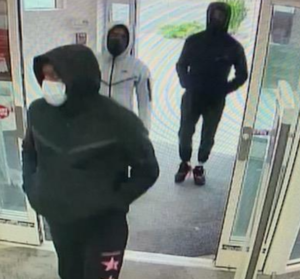 Police say that the individuals proceeded to the pharmacy drop off the counter where two of the suspects jumped over the counter. An employee was ordered to open a safe containing narcotics. The two suspects passed the narcotics from the safe to the third male who had a large shopping bag. Approximately $15,000 worth of narcotics were taken.

According to the police report, the three individuals then walked calmly out of Rite Aid and fled in a silver SUV with a white registration plate with blue lettering. The vehicle was believed to be a newer Buick or Nissan. The suspects were described as black males, in their late teens or early 20s, and all were wearing “Nike Tech” sweats.

The suspects are believed to have committed similar thefts at pharmacies in Orange and West Haven just prior to this incident.

Milford police ask that anyone with information is asked to please contact Det. Catino at This email address is being protected from spambots. You need JavaScript enabled to view it. or 203-783-4729.