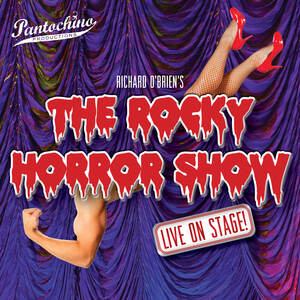 In this outrageous cult classic, newly engaged Brad and Janet find themselves lost and at the doorstep of the mansion of Dr. Frank ’N’ Furter. He unveils his latest creation, an artificially made, physically perfect man named Rocky. As they meet a houseful of wild characters, Brad and Janet’s innocence and commitment to each other is tested. Equipped with a rock ‘n’ roll score which includes the iconic “Time Warp”, this comedic musical is a homage to classic B sci-fi film and horror genres.

“It’s a very different choice for Pantochino,” says co-producer/director Bert Bernardi. “Certainly not for children, we hope to broaden our appeal with adult audiences and to share what we do with all kinds of families. It’s also a fun way to celebrate the Halloween season.”

Performances are Friday, October 22 at 7:30pm, Saturday October 23 at 6 & 10pm, Sunday October 24 at 6pm and Friday October 29 at 7:30 & 10:30pm. Free parking is available in the train depot lots during show times. Please note, all audience members must show proof of vaccination and wear masks while in the venue. Tickets are available at www.pantochino.com