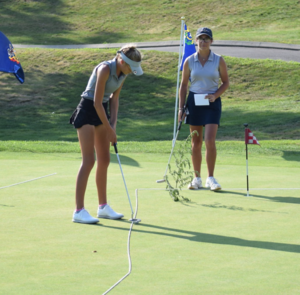 Day one of the 20th Northern Junior Championship presented by Junior Golf Hub concluded on Tuesday afternoon at Great River Golf Club, with firm conditions and a warm summer breeze providing an extra challenge for this elite field of competitors. The 36-hole stroke play championship is being contested August 2-3 and features players from a record 30 different states, provinces and countries.

In the Boys Championship, three players share the overnight lead after stellar rounds of three under par 69 – Henry Dall (Scottsdale, AZ), Nashawn Tyson (Stuart, FL) and Zachary Munno (Stamford, CT). Just one shot back at two under par sit two international players – Patricio Gonzalez (Monterrey, Mexico) and Marshall Bath (Ontario, Canada) – who are each seeking to become the first international champion of the Boys Championship. A total of nineteen players are within four shots of the lead with tomorrow’s final round on the horizon making for a thrilling finish.

In the Girls Championship, Samantha Galantini (West Orange, NJ) and Cecilia Jia (British Columbia, Canada) will each carry a share of the lead into the final round after impressive even par rounds of 72 on Tuesday. Trailing by one shot are two players who are no stranger to windy conditions – Caroline Dasch and Darrelyn Webster – both from Austin, TX. In total, eleven players are within just four shots of the lead heading into Wednesday’s final round.

The final round of the 2022 Northern Junior Championship begins tomorrow at 7:00am, with the leaders teeing off at 12:30 PM and 1:10 PM, respectively. Live hole-by-hole scoring will be available at NorthernJunior.com with frequent updates on Instagram (@NorthernJunior).

Great River Golf Club in Milford, Connecticut and is open to amateur boys and girls under the age of 19 who have not entered their first year of college. The field of 111 players consists of 75 Boys Competitors and 36 Girls Competitors, and 30 states, provinces and countries are being represented.