Pantochino's Christmas Carol Debuts in Milford for the Holiday Season 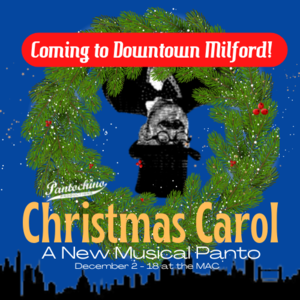 “Christmas Carol” is a new, wildly funny, family-friendly holiday musical panto by Bert Bernardi and Justin Rugg. Based on the Charles Dickens timeless story, Ebenezer Scrooge is given a transformative lesson about charity, forgiveness and love on Christmas Eve encouraging all of us to take stock of ourselves and know that true blessings in this life are meant to be shared. Pantochino’s new adaptation promises comedy, sight gags, songs and over-the-top holiday spirit.

“It’s a fun-filled experience brimming with Christmas cheer,” says Bernardi. “In the tradition of the British Panto, this is a wild, topsy-turvy ride through the Dickens story with a laugh a minute,” he added. “Panto is what we do best,” said co-producer Jimmy Johansmeyer. “This ‘Christmas Carol’ has is all—for children, adults, everyone!”

Playing the role of Ebenezer Scrooge is Pantochino’s resident composer and actor, Justin Rugg. Most recently seen as Riff Raff in “The Rocky Horror Show,” Rugg attended Lebanon Valley College where he double-majored in music theory/composition and percussion performance. He has been composing and appearing in Pantochino’s original musical productions since 2012 as well as musical directing the Summer Theatre Camp series and the acclaimed Teen Theatre program. On the Pantochino stage he’s been seen as villains, princes, bugs, cookies and Santa Claus!  Rugg recently was voted the top spot in Milford’s “Forty Under Forty” poll.

Performances of Christmas Carol are Fridays at 7:30pm, Saturdays at 2and 5:30pm and Sundays at 2pm. Seating is cabaret-style and audiences are invited to bring their own food and drink to enjoy during the performance. At the time of this announcement, vaccinations are recommended but not required and the wearing of masks is optional. The Milford Arts Council, The MAC is located at 40 Railroad Avenue in Downtown Milford. Parking is free at showtime in all train station lots. Tickets are available online at www.pantochino.com. Note tickets are not available at the Milford Arts Council.