The Changing Face of the Family Workplace 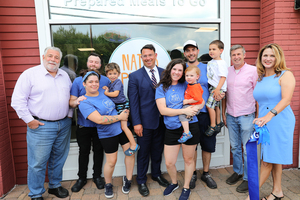 The Milford Regional Chamber of Commerce welcomes its newest member, Nate’s Plates. Located in downtown Milford, Nate’s offers a menu that explicitly supports families by providing meals for working adults, parents on the move, or a thoughtful gift for a friend in need. Their healthy meals for all ages can be called in for pick-up, or you can grab them from the fridge if you’re on the run.

Named after co-founder Caitlin’s now four-year-old son Nathan, Nate’s Plates is specifically designed so that they can work with their children nearby.

Rachel says, “We are two moms who ran into the same problem at the same time, namely ‘What on Earth can I put in my kid’s lunch that they’ll eat?!’ and we leaned on each other to solve the problem.  We knew that if we had this problem, other parents and caregivers must.  We hope they’ll lean on us the way we were able to lean on each other.”

Chamber President Christine Matthews Paine says, “I am so impressed by these mothers that they made a deliberate choice to somehow include their little children in their daily work-life.  As a working mother, I know how difficult this is, and I applaud them. They are an inspiration and a great example to many young parents.”