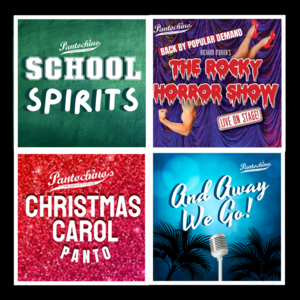 Co-producers Bert Bernardi and Jimmy Johansmeyer founded and have led the company since 2010 with performances at the MAC, Milford Arts Council. The new season is generously sponsored by the City of Milford and the Devon Rotary.

“This season is a true reflection of our mission to entertain, enrich and engage family audiences with an array of original, affordable musical theatre offerings,” said Bernardi. “We have something for everyone this year,” added Johansmeyer.

Pantochino will open its season in October with a Halloween-themed double header. For family audiences a new musical by Bernardi and composer Justin Rugg,  “School Spirits,” makes its debut. Billed as a Halloween ‘high school’ musical, Pantochino’s company members will be joined by young actors from it’s Teen Theatre program. “This is a perfect treat for the entire family,” said Bernardi. “School Spirits” plays weekends October 14-30.

For the holidays, the company will debut a second new family musical, “Pantochino’s Christmas Carol Panto.” Based on the Dickens classic, this new version promises fantastical fantasy and unexpected holiday delights. “We’re drawing from our company’s inspiration—the “Panto”—a wild and wonderful brand of family theatre enjoyed by audiences at Holiday time in England,” said Johansmeyer. “We are the go-to theatre company for fresh, fun and campy family theatre.” he added. The show plays December 2-18.

For Pantochino’s acclaimed Teen Theatre company, Bernardi and Johansmeyer have chosen the  musical, “We Will Rock You” as it’s Winter 2023 project. Featuring the music of Queen and Ben Elton,  the story is set in a dystopian world run by the Killer Queen who outlaws musical instruments. A hand full of rebels challenges the all-powerful queen as they fight for individuality, freedom and the rebirth of Rock.

“There are great roles for young actors and a timely message to the show as well,” said Bernardi. Pantochino’s Teen Theatre program is an eight-week immersive program, eight consecutive Saturday sessions beginning in January  leading to performances in late February, Registration for the program can be found at www.pantochino.com

A third original musical by Bernardi and Rugg makes its debut next spring. “And Away We Go” is an original story about a wannabe singing duo (think Steve and Eydie) out to impress Jackie Gleason in a Miami Beach nightclub in the 1960’s. Mistaken identities, missing persons, mobsters, showgirls and an Italian nona are all part of the farcical musical fun. “We’re so exciting to tell this story, following the sold out success of last season’s door-slammer, “Checking in on Charles,” said Johansmeyer, “Audiences can expect the same level of excitement, mystery and fun.”

Pantochino graciously acknowledges its 2020-21 sponsors: The City of Milford, The Devon Rotary, The Milford Bank, Berchem Moses PC and the additional support given by The Connecticut Post Mall and The Community Foundation of Greater New Haven, CT Humanities and the Connecticut Department of Economic and Community Development Office of the Arts. More information on the company and the upcoming season can be found at www.pantochino.com