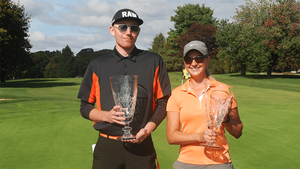 Stratford, Connecticut (October 11, 2021) – The tandem of Corey Jones and Jessica Hewitt carded a 1-over 71 to capture the 84th Mixed Team Championship at Mill River Country Club.
“It was a team effort,” Corey Jones said of the victory. “We both ham and egged it pretty well and it worked pretty well.”
Competing in the Chapman format and battling windy conditions the duo from Shennecossett Golf Club began the shotgun start tournament on the first hole and opened with the seven consecutive pars before dropping a stroke on No. 8.

In the Chapman format, both players on a team tee off, then play each other’s ball for the second shot. One of the second shots is then selected to continue play and the ball is played alternatively until holed. On par-3’s, the players must select the ball to be played following their first shot and play alternately until the ball is holed.

“I looked at the format and said the whole thing comes down to hitting a good tee shot. If you can eliminate as much distance between you and the hole as you can with the tee shot before you get to alternate shot then the format really isn’t too bad,” Jones said. “So as long as one of us bombs it then it doesn’t matter where we end up as long as we are close to the hole. If we have a wedge into the green we can hang around par.”

Final Results I Photo Gallery
Unfazed by the bogey Jones and Hewitt, both former club champions at Shennecossett GC,  birdied the next two holes to move into the red and give themselves enough of a cushion. Off the tee on Nos. 9 and 10 Hewitt, playing in her first CSGA event, set the team up with wedges into the green and Jones produced knocking both approach shots close to set up the birdies.

They did drop strokes on Nos. 13 and 14 to fall back to 1-over but a run of pars on the way to the house righted the ship and secured the victory.

“I am very excited to win. I came in with no expectations,” Hewitt said. “I just wanted to feel it out and find out what it was like to be out here. I wanted to get my comfort and it was nice to have Cory out there with me. So definitely excited to get out there again next year.”

John Svetz (Torrington CC) and Jo Rasmussen (Great River GC) finished second at 4-over, Jason Morrow (EClub of Connecticut) and Nicole Elliott (Pequabuck GC) were third at 6-over, fourth place went to Mike Moraghan (CC of Waterbury) and Lisa Fern-Boros (Highland GC) at 7-over while Richard and Pam Burt (CC of Farmington) shared fifth with Carl Guzzardi and Rachelle Campbell (The Windham Club) at 8-over.

In the Net Division the Burt’s claimed the title with a 9-under 61 thanks to 10 birdies and only one bogey. Paul Chesek (Mill River CC) and Laurie Martino (Mill River CC) were 5-under in second while Mike and Emily Spicci (Rock Ridge CC/EClub of Connecticut) shared third along with James Schlenk and Karen Kiely (Oronoque CC) at 4-under.