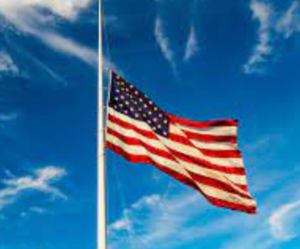 Governor Ned Lamont today announced that – in accordance with a proclamation from President Joseph R. Biden, Jr. directing flags to be lowered throughout the country as a mark of solemn respect for the victims of the mass shooting at Robb Elementary School in Uvalde, Texas – he is directing U.S. and state flags in Connecticut to be flown at half-staff beginning immediately until sunset on Saturday, May 28, 2022.

Governor Lamont said, “The news of another mass shooting, this time from Texas, is devastating. One life taken by gun violence is too many, but 15 innocent lives, including 14 children, is an utter tragedy. Nearly ten years after Sandy Hook, Connecticut knows this feeling all too well. Our collective hearts and prayers go out to the families in Uvalde trying to process the unimaginable.

“We clearly have a gun problem in America. There are more damn guns on the street than ever before, especially illegal guns. We must test our capacity as a nation in this moment to strengthen public safety and health. I want to be clear — gun violence is a public health crisis. It is incumbent upon lawmakers everywhere, whether it’s Connecticut, Texas, or our nation’s capital, to rise to the moment in addressing this problem.

“The 212 mass shootings that have occurred in the U.S. so far just in these first few months of 2022 is out of hand, and we cannot forget the true cost of these numbers – lives lost. They’re our friends, fathers, kids, teachers, and neighbors. They’re worth the effort to find a diligent, pragmatic, and hopefully bipartisan solution before we lose any more of them.”

Lt. Governor Susan Bysiewicz said, “I am absolutely devastated to hear of yet another school shooting, where the most innocent of victims have lost their lives. I send my most sincere condolences to the children, families, friends, and all who have been affected by this unbelievable tragedy. Condolences are not enough. I strongly urge Congress to pass commonsense gun laws to keep our children safe, now. There are no words to describe the callousness of this event, and to do nothing to address rampant gun violence is yet another avoidable tragedy.”