U.S. News & World Report ranks Connecticut one of the best states in the country for gender equality 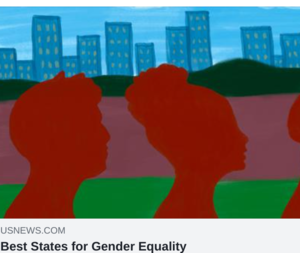 Governor Ned Lamont today is applauding the release of a study from U.S. News & World Report ranking Connecticut as one of the best states in the country for gender equality. The governor said that this issue has been a key priority for his administration, particularly when it comes to ensuring equal access to economic opportunities.

The study ranks Connecticut as the seventh best state overall in terms of gender equality, and the #1 state in its economic subcategory. According to the study, women in the state earn 97% of what men earned, the smallest pay disparity in weekly earnings. This is the first time the organization has released a report highlighting states that have created the best environments for equal treatment between men and women. It considers several factors, including politics and business, as well as physical and financial health.

“Women’s rights are human rights, and I am proud that Connecticut is being recognized as one of the top states that not only recognizes this fact but takes every effort to implement policies that promote gender equality,” Governor Lamont said. “From enacting a paid family medical leave program, to enacting laws that advance equal pay in the workplace, safeguard access to healthcare services, and increase access to childcare, Connecticut is a leader on gender equality, which is one of the reasons why we are the most family-friendly state in the country.”

One of the first actions Governor Lamont took upon taking office in 2019 was to create the Governor’s Council on Women and Girls. The group has been tasked with providing his administration with a coordinated response to issues that impact the lives of women, girls, and their families. Lt. Governor Susan Bysiewicz serves as its chairperson.

“As chair of the Governor’s Council on Women and Girls, I am dedicated to continuing our administration’s mission of creating more gender equality by supporting the rights and opportunities of women and families throughout our state,” Lt. Governor Susan Bysiewicz said. “The council is made up of an incredible group of leading women tasked with providing a coordinated state response to issues that affect the lives of women, girls, and their families. Our state has implemented a comprehensive paid family medical leave program, raised our minimum wage, passed Connecticut’s Pay Equity Law, and worked with community partners and nonprofit organizations like the Women’s Business Development Council to create the Equity Match Grant Program. That’s why we are one of the most female-friendly states in the country. It has been my honor and privilege to be a part of creating policy that has helped the women and girls of our state for over two decades, and I will continue my dedication to that mission as long as I have the privilege of serving our great state.”

Some recent policies enacted in Connecticut that promote gender equality include: