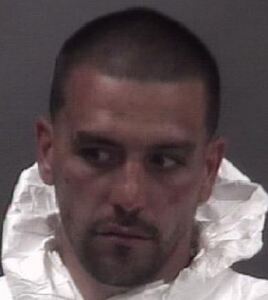 On May 17, 2021 Milford Police responded to a possible domestic violence incident at approximately 1:30 AM. The victim stated that she was in a verbal argument with a male, who then threw coffee at the victim. The male was identified as 32 year old, Anthony Sliney (W/M) of 18 Knox Street in West Haven who left the scene prior to police arrival.

At approximately 9:00 AM Connecticut State Police reported they had another domestic violence incident in Derby involving the victim and Sliney. The victim was currently at Bridgeport Hospital and disclosed further information regarding the incident that occurred earlier in Milford.

Milford Police Detectives went to speak with the victim who advised that she was too scared to give information earlier but the following events actually took place. Sliney threw coffee at the victim and took her phone. When the victim attempted to get her phone back, Sliney took out a knife and held it to her throat and threatened her. Sliney then put down the knife and strangled the victim until she almost passed out.

It was determined by Milford Police Detectives that Sliney was in the area of Walnut Beach. Officers arrived and when they approached Sliney he took off on foot into the marsh and wooded area.

Silver Sands State Park was temporarily closed, Milford Police set up a perimeter and an extensive search for Sliney was conducted on foot, by K9, and by drone.

Sliney alluded police and after the search, limited officers remained in the general area. At approximately 5:00 PM Sliney was located in the area of Walnut Beach and taken into custody.

Sliney was charged with: