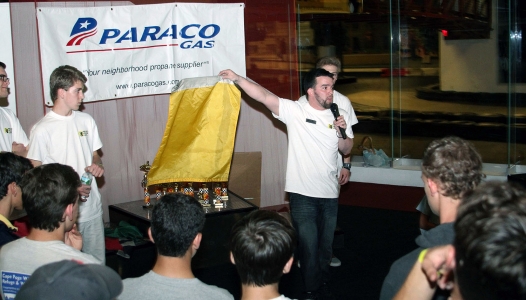 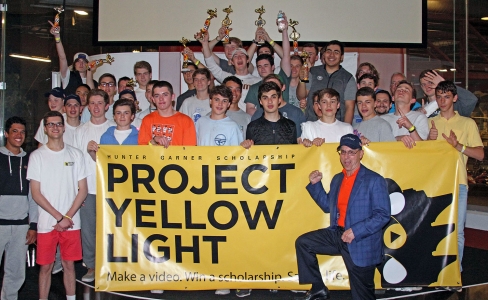 Grand Prix New York (GPNY) recently hosted dozens of teenagers from Westchester and Fairfield County, CT schools for a night of go-kart racing and bowling that raised more than $10,000 to benefit Project Yellow Light, a short film scholarship competition created to raise awareness of the dangers of distracted driving.

“Car crashes are the number one cause of death for teenagers, and Project Yellow Light aims to reduce that number by encouraging teens to use their creativity to promote safe driving habits,” said Nat Mundy, Vice President of Sales and Marketing for GPNY. “This year in addition to racing we added bowling to the mix, a new option that we hope to offer next year as the event grows to be more and more successful.”

Grand Prix New York has hosted the Race for Project Yellow Light for the past three years.  Race car driver and college student at University of North Carolina in Chapel Hill Ben Albano (Greenwich High School 2014) had the idea four years ago to start a fundraiser for Project Yellow Light, which was founded by Julie Garner in honor of her son Hunter, who died in 2007 at the age of sixteen.

“It is exciting to see more schools involved since my brother Ben started the Race for Project Yellow Light four years ago,” said Austen Albano, a high school junior at King in Stamford, CT. “We set out to raise enough money to fund one of the scholarships and we exceeded that goal, raising over $10,000 through the generosity of our sponsors and racers and the great work from my co-heads of this year’s event.  For next year we’d like to spread the word to other schools who want to start a Project Yellow Light club and expand the reach of our message to adopt a zero tolerance for distracted driving.”

Teams of two to five drivers paid a $100 registration fee per team and raced to complete the most laps in the 90-minute endurance race; proceeds benefitted the Project Yellow Light Hunter Garner Scholarship.

“We stepped it up this year to become the lead sponsors of the fundraiser going forward,” Joseph Armentano, CEO of Paraco, a propane gas delivery company with 400 employees and 170 trucks, told the Greenwich Times. “Obviously this issue of texting while driving is at the forefront, especially for new drivers.”

Project Yellow Light is a national scholarship competition designed to bring about change, in partnership with the Ad Council, Mazda, National Highway Traffic Safety Administration, National Organizations for Youth Safety and U-Haul. Applicants have a clear mission: encourage peers to develop and embrace safe driving habits.  For both the high school and college contests, the first-place winners receive a scholarship in the amount of $5,000, second-place finishers receive $2,000, and third-place finishers receive $1,000. A new billboard scholarship contest was launched on March 1st to complement the video competition with designs due on May 1, 2016. Winners for both competitions will be announced in Times Square at a press event hosted by Clear Channel.  Information for both video and design competitions can be found at www.projectyellowlight.com.

Project Yellow Light was founded in memory of Hunter Garner - a 16-year-old with a dry wit, wicked sense of humor, interesting creative mind, who loved music, running, and had lots of friends from all walks of life. Hunter died in a car crash on June 10, 2007 at the age of 16.

Grand Prix New York Racing (GPNY) is the only large indoor racing, social entertainment, and corporate event venue in the New York City-metro area. Centrally located in the village of Mount Kisco, New York, GPNY is a unique 118,000-square-foot facility that offers a quarter-mile-long, state-of-the-art racetrack for all ages; Spins Bowl (a 19-lane bowling center); Fuel restaurant and bar, with award-winning catering; an arcade, banquet facility, conference rooms, and more. GPNY is actively involved in community outreach and fundraising efforts. Since its inception in 2008, GPNY has raised hundreds of thousands of dollars for local charities by hosting high-profile fundraising events. For more information about GPNY, visit their website at www.gpny.com.

Paraco Gas is a leading marketer of propane gas in New York State and one of the top regional propane marketers in the Northeastern U.S.  Founded by Pat Armentano in 1968, the family owned and operated company serves residential, commercial and wholesale markets throughout the country. Paraco was recently ranked #14 of the top 50 propane retailers in the United States. The company is headquartered in Rye Brook, NY, has 35 operating locations and serves 15 States.  For more information about Paraco Gas, visit their website at www.paracogas.com