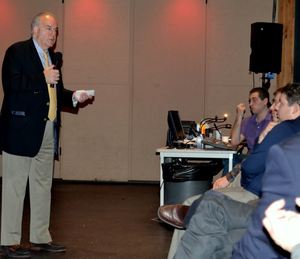 If your kids are on a sports team, do you want them to play to win or have fun? Competition over love for the sport? Playing more, bench-sitting less?

These hard-hitting questions were put to Rick Wolff, a nationally-recognized expert in sports psychology and sports parenting who spoke at The Harvey School Wednesday, Jan.11, as part of the “Harvey Presents” community-outreach program.

Mr. Wolff, host of WFAN radio’s popular Sunday morning sports parenting program, “The Sports Edge” and an Emmy Award-winning featured expert on ESPN, CNN, Fox & Friends, MSNBC and MSG, recalled his own youth when kids used to play stick ball in the alley without parent or adult supervision. “We learned how to respect the kid on the opposite team because tomorrow that player might end up being on your team. We settled issues ourselves. We decided if a foul was a foul. It’s how you learned a sense sportsmanship. Today, kids don’t know how to do that.”

A former professional minor league baseball player who lectures widely on the psychological pressures that accompany America’s passion for sports, Mr. Wolff told of his first realization of just how much parents struggle with handling their children’s involvement in sports. It was the early 1990s and he asked younger colleagues and friends who were big league ballplayers how they grew up and got into sports. “They told me it was like the Wild, Wild West with crazy coaches and pushy parents.” He decided to research the culture of children in sports. It was years before the internet as Mr. Wolff scoured libraries for psychological literature on sports parenting but found nothing, prompting him to write “Good Sports: The Concerned Parents Guide to Competitive Sports.” He went on to author and co-author some 18 books, including four on sports parenting.

A disheartening statistic Mr. Wolff shared was that 74 percent of all kids quit playing sports by the time they turn 13. “They end up quitting because they realize they are never going to end up being stars, so why play? They feel playing sports just isn’t fun and they walk away.” Also driving kids away from sports is pressure from parents. Mr. Wolff referred to what he called mom and dad’s “postgame analysis,” or “PGA,” a parental grilling right after the game about their child’s performance. “Parents feel a sense of obligation which usually surfaces after a game, during the drive home, as the perfect moment to bond with their child by asking why they missed or bungled a particular shot or pass.” The audience knowingly chuckled hearing this. “Kids want to keep their parents happy,” Mr. Wolff continued. “They want to play for fun but they also want to play to win. And to avoid the PGA, they prefer that mom and dad not come to see them play.”

Mr. Wolff, an Edgemont High School (Scarsdale) star athlete and Harvard University graduate, laid out some very real expectations for those parents who see their kids excel in sports, especially in high school, and whose strong abilities may serve as a pathway to college. He said only 4 percent of high school varsity athletes are not good enough to make Divisions I, II or III. He strongly urged parents of juniors and seniors to go see college Division-III practices. “You will see how big, fast, strong and how good they are and how playing college sports is a rigorous, full-time job that is totally demanding. If your kid ends up playing with the big stars, chances are he will never get on the field.”

The real truth is most kids really do want a chance to play and they would rather play all the time on a team that is mediocre rather than be on a great team where they’re sitting on the bench most of the time. Mr. Wolff acknowledged that Harvey’s sports program is unique because of its small enrollment and that it could offer students more of a choice than one would have in a public school sports program. All Harvey students are required to take at least one season of sports or elect to take two terms of dance or yoga to fulfill their annual athletic requirement. Mr. Wolff said it makes sense to allow students to choose their sport as well as get a chance to learn different sports “where they can play soccer all year-round but still find time to play high school basketball.”

The question and answer part of the evening opened up many diverse and thought- provoking discussions. Bedford’s Joe Lunny, whose freshman son, Tyler, plays on Harvey’s varsity hockey team, asked about specialization and the advantages and disadvantages of plugging children who show athletic ability into one sport so they can excel. Mr. Wolff gave an example of parents who are approached by a travel team coach mapping out a plan for a youngster to excel. “Parents get sucked in. There are no studies showing that specialization at an early age makes a difference down the road. Because of specialization, we have a generation of repetitive youth injuries. That didn’t exist when you played different sports, but now if you play one sport all year, you get injuries and you get burn-out.” Dean Kaplan, whose sophomore son, Alexander, is on the boys varsity soccer team, asked about balancing playing time with being a competitive team. “I understand that kids play for fun but they also play to win,” said Mr. Kaplan. Mr. Wolff responded, “Kids want playing time to have fun but they want to contribute; they want to score. The best high school varsity coaches makes sure bench players get in the game so that everyone feels they are a part of the team effort and that they are all in this together.”

In his wrap-up Mr. Wolff offered this advice to parents: “You should encourage your children to chase their dreams but pack two parachutes because if it (sports) doesn’t work out, they need to find another passion in their lives. Most athletes don’t get to the next level in sports and by the time they are in their late 20s or early 30s, they have nothing else to turn to.” He also recommended that parents have relaxing chats with their kids about whether they are enjoying the sport they currently play and if they are interested in other sports. “We want our children to play sports as long as they can to enjoy it and to be physically fit. Today, many kids are drawn to sports that have no pressure, like snowboarding, bicycling, track. You want them to master athletic skills but also you want them to have memories for a lifetime, not memories of scores or lost games, but memories of friendship and fun.”