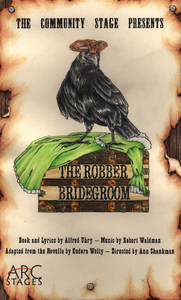 About The Robber Bridegroom

A rousing, bawdy Southern fairytale from the Pulitzer Prize-winning author of Driving Miss Daisy! The score, by Robert Waldman, is meant to be played by a small band on stage – and it’s one of the only genuine bluegrass scores ever heard in a Broadway musical. Since opening on Broadway in 1975, The Robber Bridegroom has gone on to become a regional favorite.

Set in eighteenth century Mississippi, the show follows Jamie Lockhart, a rascally robber of the woods, as he courts Rosamund, the only daughter of the richest planter in the country. The proceedings go awry, however, thanks to a case of double-mistaken identity. Throw in an evil stepmother intent on Rosamund’s demise, her pea-brained henchman and a hostile talking head-in-a-trunk, and you have a rollicking country romp.

The Community Stage at ARC is a community based theatre that will offer the best in contemporary and classic musicals and dramas. From Rodgers & Hammerstein to Sondheim and Shakespeare to Shepard, the Community Stage will continue the efforts of the original beloved Chappaqua Drama Group

Please prepare a song.  An accompanist will be provided.

Three to four rehearsals a week depending on availability.

Jamie Lockhart: A gentleman robber. Very charming.
Clemment Musgrove: A wealthy planter. Very good at heart, if a little too trusting. He adores his daughter and tolerates his wife.
Salome: Musgrove’s second wife. An ugly, scrawny, strong willed woman to be reckoned with.
Rosamund: Musgrove’s beautiful, if willful, daughter.
Little Harp: A robber. Not very bright
Big Harp: The head of Little Harp’s older brother, played by an actor crouching in a wooden box. He’s the brains of their thieving operation.
Goat: A simpleton.
Goat’s Mother
Airie: Goat’s sister
Raven: Enigmatic and watchful (male or female, depending on the production)
Ensemble: Residents of Rodney.