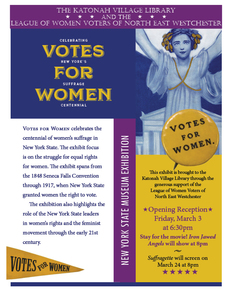 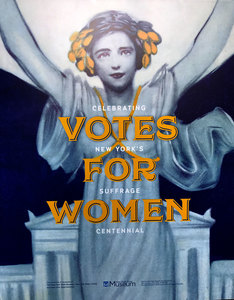 The Katonah Village Library is the first library in Westchester to host a comprehensive photo exhibit from the New York State Museum, Albany, entitled Votes for Women: Celebrating New York’s Suffrage Centennial during the month of March.

The exhibit is brought to the Katonah Village Library through the generous support of the League of Women Voters of North East Westchester (LWVNEW) serving Bedford, Lewisboro, Mt. Kisco , North Salem, and Pound Ridge. On Friday March 24 the library will host the film Suffragette, the 2015 drama starring Casey Mulligan at 7pm. The opening reception and the movies are free of charge and all are welcome.

Votes for Women celebrates the centennial of women’s suffrage in New York State. The Empire State was three years ahead of federal suffrage for women in 1920. The exhibit spans from the 1848 Seneca Falls Convention through 1917, when New York State granted women the right to vote. The exhibition also highlights the role of New York State leaders in women’s rights and the feminist movement through the twenty-first century. The LWVNYS was born out of the suffrage movement in New York in November 1919 and the National LWVUS in 1920. The large exhibit at the State Museum opens in November 2017 and features suffrage material never displayed before.

The exhibit will go to the John Jay High School Library in Cross River for the first two weeks in April and travel to other area schools. The library is located at 26 Bedford Road in Katonah. The exhibit will be on view in the Garden Room, located on the accessible lower level through the entire month of March, which is Women’s History Month.