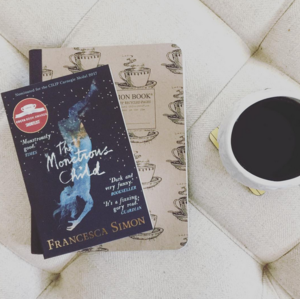 To celebrate the June 6 paperback release of “The Monstrous Child,” a young adult novel based on Norse mythology, author Francesca Simon will visit R. J. Julia on Sunday, June 4. Click here for more information and to register for the event.

“The Monstrous Child” tells the story of Hel, the daughter of a giantess and a god (trickster baddie Loki) who becomes, reluctantly, goddess of the Underworld. Hel's birth is welcomed by her mother’s screams of horror. No, it’s not because of labor pain but because Hel is born with the rotting legs of a corpse. Her older brothers are a wolf and a snake who are prophesied to create problems. Major, world-ending problems.

The three siblings are—this probably won’t come as a surprise—taken from their mother and presented to Odin, the All-Father. He sends Hel to, well, Hel. The Underworld, really, but she names it after herself. It’s one of her few consolations ruling over the dead. That and her palace. But it’s what we might call a pyrrhic victory (to borrow from Ancient Greek history). Hel’s existence is lonely and tortured.

Lavish description captures elegantly and with a heaping dose of biting wit Hel’s inner life and outer world. Reading the book felt like being inside a Hieronymus Bosch painting ... that’s also about teen angst and populated by dark humor. If you like to laugh and books that subsume you into an alien, this is your novel.

Simon, also the author of the Horrid Henry series, recently shared with Books, Ink insights on the story, the rewards and challenges of writing it, how it surprised her, and more.

BI: What would you like readers to know about your novel that they can’t get from the blurb?

BI: What interested you about working with Norse myths? What were some of the rewards? Challenges?

FS: I’ve always loved mythology. The Norse myths are hard-edged, violent, terse and compelling, all reasons why the Vikings who worshipped these gods continue to fascinate us. The gods invite us into a distant, magical world, but one where all the great issues—birth, death, love, family, betrayal, rivalry—are played out.

Myths tell us truths in an enthralling way: that life is unfair; that people have choices; that gods are indifferent. I also think the amorality of the gods is fascinating, because they are allowed to do whatever they like, and readers have always adored stories about beings with superpowers. So my greatest reward was to spend time using the myths to tell a modern story. I’ve portrayed the goddess of the dead as an angry teen, trapped in a life she doesn’t want, hopelessly in love with someone who will never return her feelings, and who loathes her body. That of course was also the challenge: to use the Norse myths but to be contemporary. I wanted Hel to speak like a teenager, but to be both modern and ancient. I was fortunate that I got her voice straight away, so I could let her tell the story without too much interference from me.

BI: Do you start writing at the beginning of a story or to reach a future point?

FS: I always start at the beginning, but often skip over the middle and write the final scenes before going back and joining the dots as it were. I like having some idea of where the journey is headed, even though I also like to be surprised.

BI: What’s the most surprising or unexpected thing that happened to your characters as you were writing?

That’s an interesting question. I didn’t know the ending until I literally wrote it. The ending happened without planning; I wrote about the end of the world and what happened to Hel surprised me. I also found Hel increasingly sympathetic, though I did not mask her horrors in any way.

BI: I was struck by how sensory and vivid the world is in “The Monstrous Child.” What were your visual inspirations for it?

FS: I looked at lots of images of Niflheim, and various representations of the Norse underworld. But my inspirations tend to be verbal rather than visual, so I would read a lot of Ted Hughes poetry before starting to write, and just imagine myself trapped in a giant tomb, which was pretty horrifying.

BI: What are five things that were on or near your desk while you were writing?

BI: What’s the best writing advice you’ve heard or been given?

FS: Always finish what you start and give yourself permission to write a bad first draft.

BI: What is the first book you remember loving?

R. J. Julia is located at 768 Boston Post Road in Madison, Conn. For more information, rjjulia.com. To register for the event, click here.