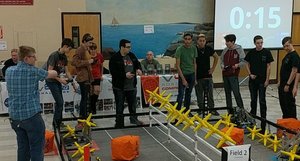 Nearly 40 teams of students from a number of public, private and parochial schools will bring their robots to Katonah Saturday, Feb. 18, as The Harvey School hosts a VEX Robotics Competition (VRC). It will mark the second consecutive year the Katonah school has hosted a robotics tournament.

Harvey’s RoboCavs, champions of six of the first seven regional competitions they have entered this year, will host the all-day event in the Fenstermacher Athletic Center. Competing will be students in both middle school and high school divisions.

In addition to Harvey’s Upper School team’s success of six tournament titles in seven tries, the Middle School team finished second Feb. 11, in the VEX IQ Challenge in East Rockaway and won a bid to compete in the state/regional tournament March 4 in Massapequa, New York. In the same East Rockaway tournament, the Upper School robotics students saw two of their teams lose a shot at the title but as qualify for the March event in Massapequa.

Harvey senior Ryan Hurst of Katonah (far left) practices maneuvers with his team's robot at a recent multi-school competition like the one his school will host Saturday in his home town.
Photo courtesy of The Harvey School