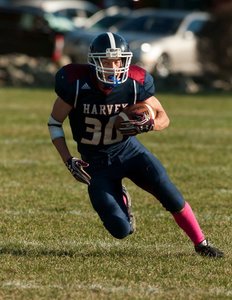 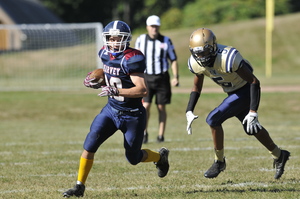 Harvey School senior Teddy Little of Port Chester capped off his outstanding football campaign with another postseason award. Little, who was a standout on both offense and defense, was selected to represent Harvey on the All New England Prep School Football Team.

As Harvey’s primary running back, Little led the team in rushing with 510 yards on 77 carries, averaging almost 7 yards per carry. He also led the Cavaliers with seven touchdowns. On defense, Little played the linebacker position where he was second on the team with 46 tackles. He also sacked the opposing quarterback three times.

Harvey athletic director Patrick Kennedy was happy to hear the news of Little’s All-New England selection. “I'm extremely pleased that his accomplishments on the football field have been recognized by coaches throughout New England." Kennedy said Little has represented Harvey well while playing for the Cavaliers. "Teddy was an integral part of our football program over the last three years. I truly admire his dedication to his teammates and coaches. Teddy's hard work and infectious work ethic set a great example for the younger players in the program.”

Little said he feels honored to be chosen as an All-New England selection. “Receiving this award has been a great honor for me. It backs up all the hard work I've put in for the team and I'm proud about that.”

Little carved out a stellar career playing for Harvey’s varsity football team since his sophomore year when the Hudson Valley Athletic League (HVFL) named him All League and his coaches selected him as the team’s Rookie of the Year. Little was selected HVFL All League again in both his junior and senior years when he won back-to-back team MVP-Offense awards.

Coach Kyle Delaney offered high praise for his star player and honor roll student.“Teddy Little is one of the best football players I’ve ever coached. He is the epitome of a student athlete and his passion for the game is unmatched. As he heads off to college he leaves behind some big shoes to fill and he'll truly be missed."

Little, who has not yet decided where he will be going to college in the fall, said he will miss his days at Harvey. “Playing at Harvey has been a great experience for me.  It's helped me grow not only as a player but as a student.  It's going to be hard to not play for Harvey next year but I believe the team will do just fine without me.”