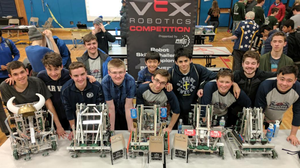 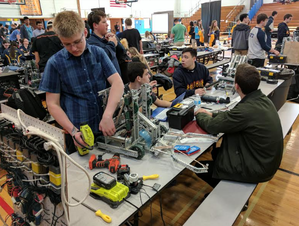 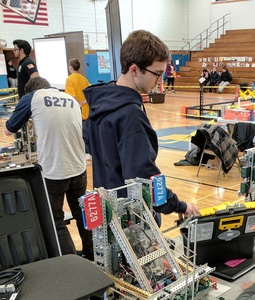 Harvey saw all five of its teams make it through the qualification matches in the first round and advanced to the elimination matches, but only Hurst and Waner's team 6277A advanced to the finals in a best-of-three match. The two Harvey teammates took the match to a third and decisive round where they came up just short of winning.

"If the match were just three seconds longer our team would be the state champions," said Harvey co-coach John Wahlers. "Ultimately, the competition is about celebrating STEM education, sharing ideas, working collaboratively, and forming friendships across the state with technology as the common denominator," he added.

Team 6277A also won the state robotics skills challenge --- a separate individual competition that requires the robot to be programmed to run through a challenge for 60 seconds autonomously and then another 60-second segment where the robot is driven.

Harvey Director of Robotics and the team's co-coach, Chris Kelly, was very happy to see his students come out on top in the skills challenge. “Winning the state title for robotic skills is a major accomplishment for our program,” Kelly said. “I am proud all of our teams," he added.  A team of Middle School RoboCavs finished fifth in their first state competition. Mr. Kelly called the finish of the youngest members of the program “outstanding.”

All five of Harvey's Upper School teams have qualified to compete in the nationals at the CREATE U.S Open in Council Bluffs, Iowa April 6-8. The second-place finish in the states qualifies Harvey’s team 6277A for the VEX Robotics World ChampionshipsApril 19-22 in Louisville, Kentucky where Harvey will face the best teams from countries that include China, Australia, Singapore and Mexico.