A Tale of Two Delis 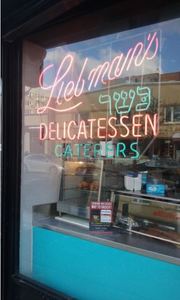 Many years ago while in college and in search of cheap living arrangements, I moved to the Ocean Parkway area of Brooklyn. The apartment, the neighborhood, and the roommates were eminently forgettable, but there was one aspect of the whole experience I didn’t want to forget: a little deli on a side street that was a throwback to another time called Horowitz’.

To step inside the Horowitz deli in the 1980s was to journey back to a time when Jewish cuisine and culture had dominated that area of Brooklyn. The ceiling was the original pressed tin, the tables were worn Formica, and the countertops were all marble. A series of heavy wooden doors with brass handles provided access to the refrigerators along the back wall. The menu was simple: knishes, Matzo ball soup, pastrami and my personal favorite, hot dogs with cole slaw and Dr. Brown’s Cel-Ray soda. Sadly, Horowitz’s is long gone.

It is a simple fact that NYC was once the home of over one hundred Jewish Delis. Over the years the many of these have closed, leaving a handful of famous restaurant survivors. This past December one of the most well-known of these, the Carnegie Deli, closed its physical store, leaving Katz’ downtown as one survivor of a once thriving cuisine.

Interestingly though Riverdale is home to not one but two of the remaining Jewish Delis in New York: Leibman’s and Loeser’s. On a series of recent Sundays we undertook an urban adventure to sample their offerings: today we explore Leibman’s.

Located on 235th St, in the heart of central Riverdale, Leibman’s was founded in 1953 by Joe Leibman. Operated since 1980 by Joe Dekel, it maintains a menu of kosher Jewish favorites that preserves the original recipes. Food is available both in a small dining room, and through a take-out menu (expect long lines on Sunday afternoons.) Delivery is also available in the Riverdale area with a minimum order of $20.

If you have the time or are in the area to visit Wave Hill, relatives or Van Cortlandt Park, dining in is the way to go. The waiters are friendly and efficient, and the menu features aboth traditional deli fare as well as some more unconventional items. Try the Pastrami burger, for example if you are genuinely hungry.

Our rating: 4 out of 5 kasha knishes.