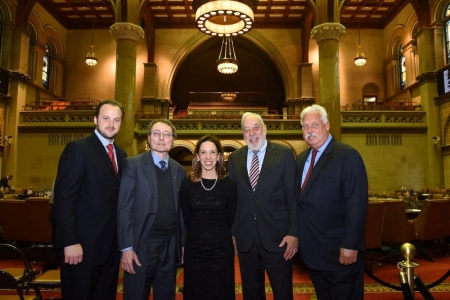 During the closing days of the current legislative session in Albany, a bill with the deceptive title of “Fairness in Cooperative Home Ownership Act” was stopped cold by a massive effort by the BRI’s Cooperative & Condominium Advisory Council.

The bill, (S5644), and its Assembly comparable (A1120) would have created unreasonable restrictions on a cooperative board’s ability to properly, prudently and thoroughly process applications and make admissions decisions in that same vein.
The draconian penalty for a board failing to comply with the mandatory 45-day period to process applications and make a decision would be the automatic acceptance of the applicant in question as the new unit owner.

Diana Virill, Chair of the CCAC, said on behalf of the 800 Boards and 20,000 unit owners in member coops throughout Westchester, “We are unalterably opposed to these unreasonable and unnecessary restrictions. The excessively stringent time-line proscribed in the legislation is intrusive, impractical, unnecessary and unfair.”

Albert Annunziata, Executive Director of the CCAC, noted that the Republican-controlled Senate moved unusually fast, passing the bill out of committee and then moving it to the “floor” for a vote. “Only two Senators out of the entire state, Jeff Klein from the Bronx and Tony Avella from Queens & Nassau counties had the wisdom and courage to vote against it. For that, we commend them.”
The BRI, in conjunction with its co-op / condo and property managers divisions, launched a full-scale effort, concentrated in the last few days of session, to stop the advance of the comparable bill in the state Assembly, A1120.

The BRI also had a powerful ally in the fight against this legislation, with Mary Ann Rothman, Executive Director of the Council of New York City Cooperatives & Condominiums.

Rothman directed her ire squarely against the legislators who sponsored and supported these bills. “This bill would be detrimental to the vast majority of cooperatives who behave well and respect applicants…It also is the start of a slippery slope towards total oversight of the admissions process…including mandatory disclosure of the reasons for a Coop Board’s decision on an application.”
Daniel Finger, Esq., Associate Counsel to the BRI and CCAC, retorted in a scathing Memorandum of Opposition sent to state legislators, that the allegations in the bill’s wording were simply not the case.

“The timing associated with the processing of applications has nothing whatsoever to do with illegal discrimination…further, the suggestion in the bill’s findings that cooperative purchasers are subject to terms and conditions that do not also apply to purchasers of other single family residences is irrelevant”.

“The whole thrust of this 45-day legislation is extremely dangerous…It is highly punitive and prejudicial to cooperatives, in the unreasonable and unnecessary time-frames and the penalty for non-compliance, which is mandatory acceptance of the applicant. This is a clear-cut example of the state legislature attempting to usurp the authority of cooperatives, and it is an outrage,” said Finger.
Both the Westchester CCAC and the Council of New York Cooperatives vowed to remain vigilant and continue the fight against these bills.

The Building & Realty Institute is one the largest construction, development and real estate-related industry trade associations in New York State.

Founded in 1946, the Westchester County, NY based organization has more than 1500 members, primarily in the Westchester/Mid-Hudson Valley region of the state.

The BRI is supported by a multi-talented professional and consultant staff versed in all facets of the building industry: planning, engineering, law, insurance, environmental regulations and governmental relations on a state, county and local level. Their services extend to all facets of the Building and Realty industries.

For more information about the Building & Realty Institute, please contact Maggie Collins at 914-273-0730 or visit the website:www.buildersinstitute.org/.