NYS Police Crackdown on Distracted Driving with Operation Hang Up 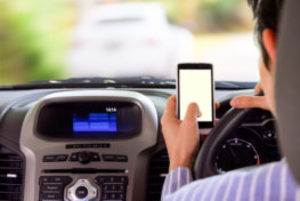 The New York State Police announce a statewide crackdown on distracted driving as part of April’s National Distracted Driving Awareness Month. The crackdown, called Operation Hang Up, is a special enforcement effort to step up patrols and checkpoints targeting drivers on electronic devices from April 6 through April 10.

While tickets for cell phone use continue to decline, the proliferation of smartphones have caused texting tickets to rise every year since 2011.

April traditionally marks the start of the spring driving season. In order to minimize tragedies as the traffic volume increases, State Police and local law enforcement agencies will be cracking down on distracted driving, along with other vehicle and traffic law infractions.

According to the National Highway Traffic Safety Administration, nationwide in 2015, 3,477 people were killed in distracted driving crashes and an estimated 391,000 were injured in motor vehicle crashes involving distracted drivers. In addition, according to a study conducted by the Institute for Traffic Safety Management and Research, in 2015, 160 people were killed and more than 33,000 were injured in crashes in New York that had "driver inattention/distraction" reported as a contributing factor. The same report noted that 21 to 22 percent of police-reported fatal and personal injury crashes had “driver inattention/distraction” reported as a contributing factor each year.

New York State Police Superintendent George P. Beach II said, "Cell phone use and texting are responsible for a significant proportion of traffic crashes, injuries and deaths. If you're texting, you're not driving. While the New York State Police enforces New York’s hand held cell phone and electronic device laws at all times, Troopers will crack down on violators during the Operation Hang-Up campaign."

Troopers will be using both marked State Police vehicles and Concealed Identity Traffic Enforcement vehicles as part of the operation in order to more easily identify motorists who are using handheld devices while driving. CITE vehicles allow the Trooper to better observe distracted driving violations.  These vehicles blend in with every day traffic but are unmistakable as emergency vehicles once the emergency lighting is activated.

During the April 2016 Operation Hang Up campaign, State Police issued more than 18,000 tickets, including more than 2,000 tickets for distracted driving. The tickets written were a combination of talking on a cell phone without a hands free device, texting, or using an electronic device while driving.

The Operation Hang Up campaign is funded by the Governor's Traffic Safety Committee.