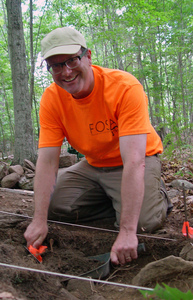 During the past three years, archaeologists and students unearthed clues about Connecticut’s early colonial past at three archeological sites: a buried house cellar within the original John Mason home lot, a buried farm complex associated with Lt. John Hollister of Glastonbury, and the homestead of Francis Stiles (later owned by the Ellsworth family of Windsor). Jones led these excavations and will explain what these recent archaeological explorations in Windsor and Glastonbury tell us about Connecticut’s earliest European settlers, and how modern technology helps rediscover these long-forgotten sites.

Brian Jones is Connecticut’s State Archaeologist and is associated with the Connecticut State Museum of Natural History at UConn. Jones has been an archaeologist since 1992 and received his Ph.D. in Anthropology from UConn in 1998. He has a broad background in New England archaeology that spans the Paleoindian period through the industrial era.