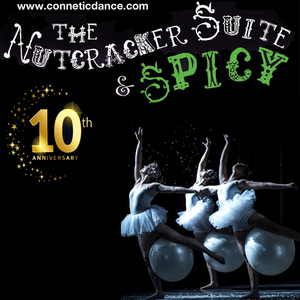 The Nutcracker Suite & Spicy —a rousing, toe-tapping, high-kicking spin on the classical ballet choreographed and directed by Carolyn Paine and performed by CONNetic Dance is returning for its celebratory 10th year to delight audiences Dec. 20-22, in the Aetna Theater at the Wadsworth Atheneum Museum of Art, located at 29 Atheneum Square North in Hartford. This production has truly become a staple in the holiday season for CT. It is a unique and lively re-imagining of the holiday ballet classic that offers a much needed contemporary update filled with top-notch professional dancing and a great sense of humor.

The show has been featured nationally in DanceInforma Magazine which cited it among the top three unique re-boots of the Nutcracker along with Mark Morris’ “Hard Nut” and Jennifer Weber’s “Hip Hop Nutcracker.” With “The Nutcracker Suite & Spicy,”, audiences are in for the usual treats the production has provided for the past 10 years including the diverse and talented cast, notably featuring Hartford rap legend Tang Sauce. The quirky, innovative production also features memorable scenes such as the riotous Ugly Sweater Christmas party and the dizzying SnowBall—a beautiful scene with dancers wearing eye-popping LED tutus gliding across the stage on large pearly white exercise balls as snow falls. There are also memorable characters including the sassy hip-hop Sugar Rum Cherry, the delightfully devilish Club Rat, and of course CONNetic Dance’s signature Florettes, who perform a Rockettes-inspired Waltz of the Flowers kick-line.

The Nutcracker Suite & Spicy brings together exceptionally talented dancers of many disciplines and backgrounds to update the classic holiday tale in a relatable contemporary way that truly reflects the dance world as well as an urban environment-like Hartford, the city it hails from. The production’s choreography and story fuses together ballet, contemporary, hip hop, breakdancing, jazz, tap, ballroom, and acrobatics with some dancers who were classically trained in the studio, and others having honed their skills on the street.

“This show and its choreography really celebrates diversity at its core. It merges a diverse group of dancers and their styles seamlessly to retell the story in a more relatable and fun contemporary voice. In a world that has a lot of news about people not being able to come together, a production like this shows what is possible when we do come together in an inclusive way and inspire and support each other,” says Paine, a Boston native and graduate of the University of Hartford. “I am honored to have been at the center of this production and to have gotten the opportunity to let it evolve, allowing this show to really respond to social issues and culture over the past 10 years.”

Many of the cast members have been with the show for all or most of the past decade including Director/Choreographer Carolyn Paine. Also returning to the production is Alex Zarlengo, who has danced the title role of The Nutcracker since the first year. Zarlengo was also recently featured in Toddrick Hall music videos and on stage in “Kinky Boots” with Gateway Playhouse in NY. Longtime cast member Will Jackson returns to this production as well in the role of the lead Tap Soldier. Jackson has also toured internationally with Riverdance. Some of the other longtime cast members performing include: Jamie-Lynn Fontaine, Norman Campbell, Anton Cort, Elisabeth Jeffrey, Leigh Schanfein, Sam Flook, Fred Rosado-who plays the Club Rat, and Kayleigh Crocetto-who plays Clara.

In celebration of the show’s 10th anniversary, several special events are planned. A documentary film, “The Nutcracker Suite & Spicy: 10 Years in the Making” by CineVerite Productions, will premiere December 13th at the Wadsworth Atheneum. This film follows the remarkable evolution of the creative process surrounding the production from its genesis to its 10th year on the Aetna Theater stage while also examining the cultural relevance of rebooting the holiday classic for a contemporary audience. Tickets and more information about the film premiere and the talk back which will follow are available at www.thewadsworth.org . The lobby of the theatre during all performances will feature a “Warm Up” where adult guests may purchase signature cocktails, children may color pictures of Suite & Spicy characters, everyone may see displays of video clips and photos from past productions, take a photo with show props in the Nutcracker photo booth, and more before each show begins. Also part of the 10 year celebration will be a black tie 10th Opening Night Gala in the lobby following the Friday, December 20th performance. This event will also be attended by the cast and will offer photo opportunities, a spectacularly unique 10th anniversary cake, and a complimentary champagne cocktail celebration toast.

Tickets for the Gala are $75 and includes admission to the performance as well. PERFORMANCES Performances will be held December 20, 21 and 22, in the Aetna Theater at the Wadsworth https://www.eventbee.com/v/connetic-dances-nutcracker-suite-spicy-10th-anniversary-2019/event?eid=115888924#/tickets.