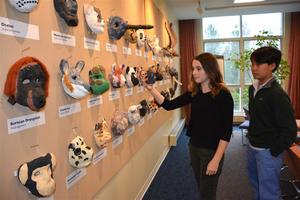 Sixth through eighth grade students at New Canaan Country School have created interactive Augmented Reality projects which are now on exhibit in the Middle and Upper School buildings. Augmented Reality (AR) is a technology that superimposes a computer-generated image, sound or video on a real-life image, providing an “augmented” or enhanced view. Visitors to the exhibit can scan an iPad or mobile phone over each image to reveal a two-minute video created by the student.

“The students and teachers enjoy experimenting with cutting-edge technology and connecting the natural world with the virtual world,” said Country School’s Director of Academic Technology Aron Back, who has been working with science teachers to incorporate this technology into their classes.

“There is so much room for creativity with AR,” added Science Teacher Sanj Maliakal. “Because of that, there is a lot of buy-in from students about their learning and finished products.”

Mr. Maliakal’s seventh grade science classes created a complete exhibit of handmade masks featuring endangered species such as the nearly extinct narwhal, forest owlet and Amur leopard. By holding an iphone over the masks of each animal, a video appears which is specific to that species. It might include the animals’ movements, activities or sounds, along with pictures and narration.

For seventh grader Seth Yoo of Pound Ridge, NY, who researched the forest owlet, the project pushed him out of his comfort zone and into a much more creative style of reporting.

“I thought I was more of a research paper guy,” he said, “But I ended up using video effects and narration. I was also able to show the owl’s personality through my video.”

“There’s such a visual aspect to this project which really appeals to me,” said seventh grader Lila-ViVi Fagel of Wilton.

The technology has been met with enthusiasm from students in both the Middle (grades 5 & 6) and Upper School (grades 7-9) divisions. Eighth graders recently used Augmented Reality to create an interactive periodic table which allows viewers to scan over a drawing of a particular symbol thereby activating a student-made video about the element’s characteristics. In sixth grade, students used Augmented Reality for their presentations about birds indigenous to our area. There is also a Middle School Augmented Reality Club, which was formed in response to the increasing popularity of the creative technology.

“In a few years Augmented Reality will be part of everyday lives,” predicted Mr. Back. “Innovation is already part of our everyday lives at Country School and having students working in cutting edge media is what it is all about.”