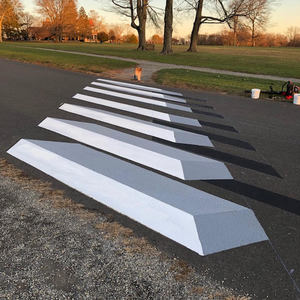 In New Canaan, a 3D crosswalk is making the streets safer – and more fun to cross – by slowing down traffic.

The town of New Canaan unveiled its first ever “3D crosswalk.” The crosswalk, which is painted to look like it is hovering over the street, is intended to slow down traffic and reduce driving speeds in Waveny Park.

Tiger Mann, Director of Public Works, got the idea from East Elementary School and Greenwich Academy students Kate Beuerlein, Ella Ferrer, Stella Heijens, Treasure Hudson, Kathryn Iacono and Madison Ruggieri, whose Girl Scout Troop is participating in a FIRST LEGO League international robotics competition. The Tech Divas (Girl Scout Troop 50530’s team name) proposed the idea for the 3D crosswalks to Mann, who loved the idea and helped them get approval from the New Canaan Police Commission and Parks & Recreation Commission. The girls came up with the idea after seeing a young child nearly hit by a car near the athletic fields.

The girls’ vision was realized this week. The town commissioned Dante Carter, the manager of Yellow Dawg Striping, a road painting company, to create the crosswalks on Waveny Road. Carter said the idea had originally come from Ísafjörður, Iceland and that he couldn’t wait to paint them after seeing pictures of the traffic-calming illusions.

According to Mann, “The 3D crosswalks are a creative and inexpensive way to slow down traffic and increase pedestrian safety. The crosswalk is an illusion that appears to pop up as you drive closer to it, designed to make sure drivers slow down. We think these crosswalks are the first for Connecticut.”

The first 3D crosswalk was installed at the intersection of Waveny Road (at the pool) and the other will be installed at the pedestrian crossing in front of Waveny House. The Police Department conducted traffic studies prior to installation for these locations and will perform post-installation traffic studies to determine the efficacy of the crosswalks.

The Police Commission has not decided whether more 3D crosswalks will be added in New Canaan, but if the experiment proves successful more might indeed follow. According to Mann, similar crosswalks have been painted in the United Kingdom, India and Iceland, and have been successful in lowering speeds.

Diane Ruggieri, Girl Scout Junior Troop 50530’s troop leader, said “We are so proud of our Tech Divas Team. FIRST LEGO League introduces basic engineering concepts (e.g. coding), innovation skills and reinforces team building. The 3D crosswalk is a reflection of their hard work and perseverance. Most of all, they had a lot of fun with each other and meeting our town officials. This was a memorable experience for them. They are thrilled to make a difference in our community.”

Girl Scouting builds girls of courage, confidence, and character, who make the world a better place. Girl Scouts of the U.S.A. is the preeminent leadership development organization for girls. And with programs from coast to coast and across the globe, Girl Scouts offers every girl a chance to practice a lifetime of leadership, adventure, and success. To learn more about Girl Scouts of Connecticut, visit gsofct.org.