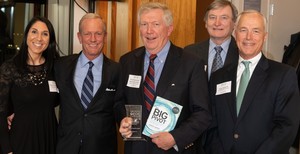 The Town of New Canaan was honored with an Energy Efficiency Award in the Municipality category at the Stamford 2030 District’s Annual Change Maker Awards on December 3, 2019 in Stamford.

The Stamford 2030 District, in conjunction with the Business Council of Fairfield County, has established regional goals which include improving social and economic outcomes in relation to the environment.  Reducing energy and water consumption as well as emissions from transportation are among the goals. In addition, the Stamford 2030 District has made community resilience a priority. The Change Maker Awards honor local projects excelling in these areas.

In 2018 and 2019, the Town of New Canaan achieved several sustainability goals, first with the Eversource natural gas expansion project which brings cleaner and cheaper heating to four of the five public schools and several Town buildings as well as several hundred homes and businesses in downtown New Canaan, and second with the Town’s first solar panel installations on Town Hall and three other Town-owned buildings.  The natural gas expansion also will afford New Canaan the opportunity to install energy saving co-generation facilities at some of the public schools and the Town wastewater treatment plant over the next few years.

The award ceremony on December 3, 2019, recognized the sustained effort on the part of the Town of New Canaan in the energy conservation and resiliency areas.