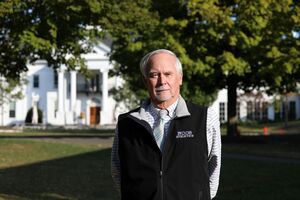 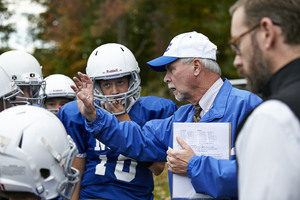 Mr. Giggi has been an English and History Teacher in the Upper School since 1981. During his time at NCCS, he has also chaired each of the the History and English Departments for many years, and has served as an advisor, faculty representative to the Board of Trustees, coach of baseball, soccer, football and basketball, member of the faculty chorus and he was even acting Head of the Upper School from 2000-2001.

“Tom has had a hand in developing every aspect of our notable humanities curriculum in the Upper School, and as a true student of history, Tom also co-developed the 9th grade Civil Rights trip, providing students with a peak into this important time in our nation’s history,” said Head of School Aaron Cooper.

In the fall of 1981 when Mr. Giggi arrived as a new Upper School teacher, there was also a new math teacher named Elaine, to whom he is now married. They are the proud parents of two NCCS grads, Ryan ’07 and Tyler ’09. In a circular event that is more common than you may think, Ryan Giggi was an NCCS Apprentice and, while here, Ryan met another Apprentice named Jeannette to whom he is now married.

“Tom has touched so many lives during these past 40 years in his various roles, not least of whom are his colleagues, and I will share reflections from two of them whose words best encapsulate Tom’s style, impact, and approach,” said Mr. Cooper. “In the words of Upper School Teacher Bart Fredo, “Any teacher of distinction embodies special qualities: extensive knowledge, communication skills, a friendly and respectful demeanor, patience, a strong work ethic, thorough preparation, discipline. Whether in the classroom or on the playing field, Tom Giggi is thus defined.’”

New Canaan Country School is a co-ed, independent day school for students in Pre-K (ages 3 & 4) through Grade 9 living in Westchester and Fairfield counties. Graduates excel at top day, boarding and public secondary schools and go on to lead lives of impact and purpose. For more information, please visit countryschool.net.