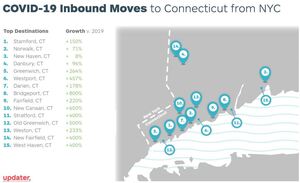 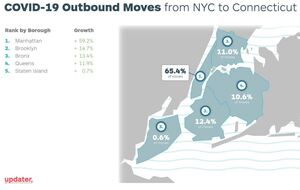 Lately, there has been much speculation and anecdotal evidence that Connecticut is a place people are flocking to for new work-from-home routines and to escape the dense nature of the city. New data suggests that the state did, in fact, experience an unusual influx of people due to the pandemic.

Moving app Updater recently examined March 1 to September 30, 2020 moving data across the region. For the first time in three years, more people moved into Connecticut than out of Connecticut. Compared to 2019, this year saw 43% more inbound moves into the state.

“We can dissect the data by zip codes and cities providing a really unique and insightful look at trends,” commented Jenna Weinerman, Updater’s Vice President of Marketing.  “The number of people who moved from New York City to Connecticut doubled during the pandemic, compared to 2019,”

The all-in-one app to help people move estimates that one-third of all U.S moves leverage its technology to streamline the process, providing real-time insight into migration patterns.

Where are people coming from?

“Most moves nationwide are local moves – that’s not unusual. But, what’s unusual about this year is the rapid growth in inbound moves from longer distance origination points,” said Weinerman.  The data shows that inbound moves into Connecticut grew year-over-year from every major metropolitan area on the top 10 origination list.

Where did people go?

According to Weinerman, “Some smaller Connecticut cities that you don’t typically find on top 10 moving destination lists popped into view during the pandemic. With mortgage rates at historic lows and dense cities losing appeal because of the virus, you begin to see atypical real estate markets become hot.”