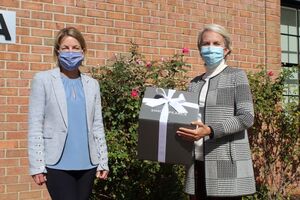 Over sixty members of the Horizons at New Canaan Country School community gathered virtually on October 28 for the third annual Leadership Celebration to share program updates and recognize service milestones and contributions to the non-profit organization.

Executive Director, Nancy von Euler said, “I want to express my heartfelt thanks to all of you with us tonight. This has not been an easy 7 months, but your generosity, leadership, and caring have inspired and encouraged us. If there is a silver lining in all of this, I firmly believe that we are going to emerge from this time with strengthened practices and programs and an even deeper commitment to work towards justice and equity.”

The Newman’s Own Foundation was presented with the George E. Stevens Visionary Award. The Newman’s Own Foundation has been supporting the organization for over 27 years. This long-standing commitment and partnership enable Horizons to provide the level of programming and support our students and their families need; creating opportunities, building brighter futures and being an inspiration for change.

Miriam E. Nelson, Acting President and CEO, Newman’s Own Foundation shared that: “We are proud to have provided support to the Horizons program at New Canaan Country School for over 20 years.  Horizons at NCCS plays an important role in our community, helping to close the opportunity gap by bringing enriching educational experiences to underserved children.”

Founded in 1964, Horizons at NCCS is the first in a nationwide network of programs that are successfully closing the opportunity gap experienced by under-resourced students. Horizons at NCCS builds deep and lasting relationships with the 400 K-12 Norwalk and Stamford students it serves. The six-week Summer Program and year-round academic and enrichment programming help students imagine and achieve a brighter future for themselves. For more information, please visitwww.horizonskids.org.