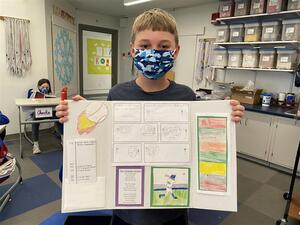 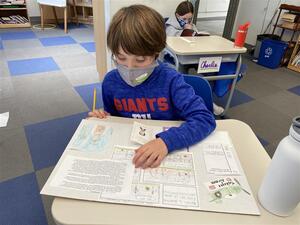 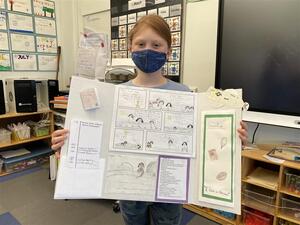 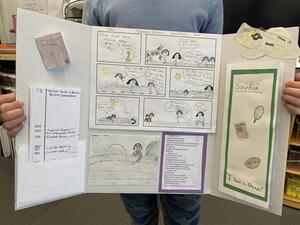 New Canaan Country School fourth graders prepared and shared multi-genre research projects on people who have made an impact on the world at a publishing party held in the Lower School, March 30.

The projects are the culmination of the fourth grade’s yearlong emphasis on the theme “Justice for All,” which focuses on those who fight for social justice and make a significant impact on the world while enduring significant personal sacrifices of their own.

The curriculum also focuses on the acquisition of close reading and critical thinking skills, annotation of text, the creation of theory statements, essay and poetry writing, and art.

Juan-Carlos Bowman, also of New Canaan, illustrated his theory statement: “To believe in something can mean sacrificing everything.” His work focused on the Tuskegee Airmen, a group of primarily African-American military pilots who fought in World War II and American rights activist and former football player, Colin Kaepernick.

Annie Mallozzi, of Norwalk, highlighted the fact that the Tuskegee Airmen were actively fighting Nazi oppression while teenage diarist, Anne Frank, became a voice against genocide for generations to come. In her storyboard, Annie depicts an imaginary conversation between the two in which they discuss what makes a hero: fighting or writing? Both, she concludes. Social activism can take many forms.

“There are no limits to the ten year old’s depth of compassion,” said Grade 4 Teacher Kristin Quisgard.