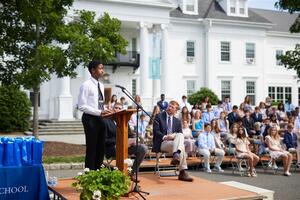 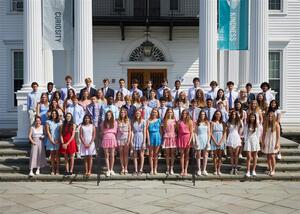 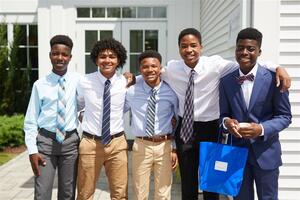 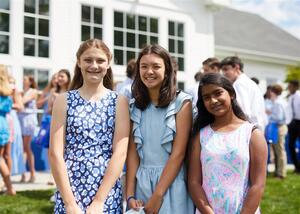 Mr. Palmgren noted the class’ ability to coalesce when under pressure, forming a stronger whole. He went on to mention the concept of an arch in its relation to this year: “The way to strengthen an arch is to put weight on it, because it binds the stones together, and only with tension does it hold weight. This year has bound this group together in so many ways, and there is a high tensile strength to that cohesion. So regardless of where you go for ninth grade, look around, this is your home, these are your people and we couldn’t be prouder of you. We only ask that you continue to live by and commit yourself to those shared aspirations and the core values you have learned here at Country School, those of courage, curiosity, community and kindness.”

Eighth Grader Ifeanyi Ndokwu of Stamford delivered the Class Reflection. “No matter how prepared you may be, life will always find something new to throw at you, and after 4 years I’ve seen problems stretching from bad grades to frustrating losses and especially embarrassing moments. I’ve evolved and become a better version of myself every time.”

Members of the eighth grade Class of 2022 include: