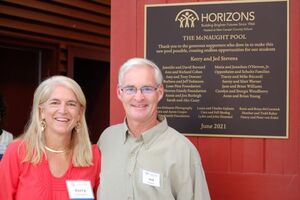 The Horizons at New Canaan Country School Board, Board of Governors and leadership donors gathered together on Wednesday, September 8, to dedicate the new and improved McNaught Pool and celebrate another successful year. The new pool will serve as a springboard for student success for years to come as our students master swimming skills and build confidence that spills over into all aspects of their lives.

Lyn McNaught, former Horizons at NCCS Executive Director, whose leadership led to the building of the original Horizons pool, was in attendance to help with the dedication of the new pool. A new plaque was revealed which thanked pool donors whose generous contributions made the updated pool a reality for Horizons at NCCS students.

The pool was used over the summer not only for student swim lessons, but also for lifeguard training and adult caregiver swim lessons, as well. Jed Stevens, the son of the founder of Horizons of NCCS, George Stevens, and his wife, Kerry Stevens, former Horizons at NCCS Executive Director, revealed the dedication plaque for the new pool. Horizons Board Chair, Sanny Warner, led the dedication ceremony by expressing her gratitude, “We are beyond grateful to the generous donors who made the new McNaught Pool a reality.”

The ceremony also provided the opportunity to honor two summer faculty members, Sean Robb and Jasmin Roberson, who reached their 10-year anniversary with Horizons at NCCS. Executive Director, Nancy von Euler, said: “There is no doubt that our incredible faculty are a very important ingredient in that secret sauce we talk about. One of the things that sets our program apart from others is their extraordinary love for and commitment to Horizons, as evidenced by the significant number of faculty who return year after year, often for a decade or more. That consistency in the adult community at Horizons is what makes Horizons feels more like a family than a program, and that makes all the difference in the world for our students and caregivers.”