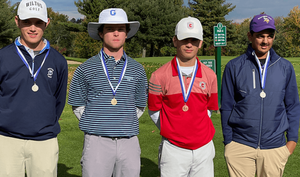 For the 13th time in school history, New Canaan High School has won a state championship in golf. On an overcast and blustery day at Chippanee Country Club, New Canaan posted a team total of 32-over to inch past runner-up Glastonbury High School (+34) by two strokes.

Competing in the first CIAC Fall Golf Championship New Canaan was led by a 6-over 76 from Marc DeGaetano, one of three Rams to post rounds in the 70s. For New Canaan it was their first state title since 2015, the 10th won by the program in a 13-year span dating back to 2002.

In the Individual Championship Connor Goode claimed the title thanks to an even-par 70 to win by three strokes. The Glastonbury senior rolled in four birdies and four bogeys throughout his round. Goode, the winner of the 2021 Connecticut Junior Amateur champion, all but sealed the victory with his three birdies in four holes barrage from Nos. 8-11.