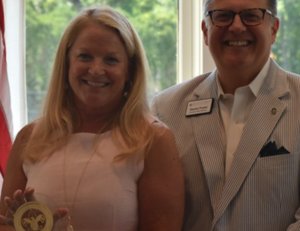 Longtime resident Tucker Murphy, Administrative Officer for the Town of New Canaan received the Women In Leadership Award from Boy Scouts of America Connecticut Yankee Council this week at the Country Club of New Canaan.

The award recognizes women who exemplify the ideals of the Boy Scouts of America as expressed in the Scout Oath and Law.

Tucker is well known for generously giving her time, energy and talents for the betterment of our community in her current position as Administrative Officer for the Town of New Canaan and previously as Executive Director of New Canaan Chamber of Commerce.

During 2008-2020, as Executive Director for the New Canaan Chamber of Commerce, Tucker completely rebuilt the organization, which now is a robust and vital partner to the local business community. Tucker has served as an elected official to the Town Council and is a member of the New Canaan Board of Education. Tucker is the current Chairperson of the  “Tourism and Economic Development Advisory Committee”, a Board member for the League of Women Voters, a member of the Community Emergency Response Team (CERT), a past member of the National Charity League, Past President of the Kiwanis Club, an inaugural member of the Senior Internship Committee and served on the Board of the YMCA.

She has also been actively involved as a Girl Scout leader, a President of the South School PTC, serves as a Justice of the Peace and a member of the First Presbyterian Church.

Introducing Tucker and welcoming her to the podium to receive her award was Tucker's good friend, New Canaan resident and fellow community volunteer and business owner, Steve Karl.

The event's featured speaker was Redding resident Clara Blackwell who is a founding member of Scouts BSA Troop 306 in Redding. Blackwell defied all odds by achieving Eagle Scout status and paved the way for young girls eager to join BSA to do the same! Clara Blackwell is headed to Dickinson College where she received a Presidential Scholarship!

Read more about the award and Women in Leadership Lunch here.