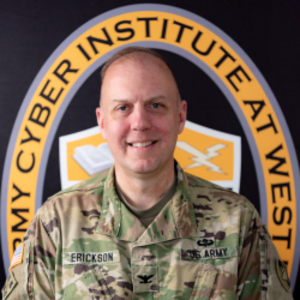 Originally from Seattle, WA, he began his Army career after graduating from West Point as an Armor officer.  He served in a variety of Armor assignments before transitioning to the Simulation Operations functional area, where has used technology to train and exercise Soldiers and units from the individual up to the Combatant Command levels.  He served in locations such as the Republic of Korea; Fort Lewis, WA; Fort Riley, KS, Germany; Fort Hood TX; Kuwait; Iraq; the Pentagon; and Suffolk, VA.

In his position as Director of the Army Cyber Institute, Col Erickson leads a multi-disciplinary research institute focused on expanding the Army’s knowledge of the cyberspace domain.