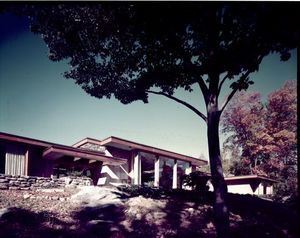 Today, the National Trust for Historic Preservation and the Gores family announced the execution of a preservation and conservation easement that will protect the Landis and Pamela Gores House in New Canaan, Connecticut, in perpetuity. The Gores House is one of the earliest of New Canaan’s modern houses.

Designed by well-known architect Landis Gores in 1947 as his family home, the Gores House was listed on the National Register of Historic Places in 2002. Gores, a member of the Harvard Five, a group of New Canaan architects, worked extensively with Philip Johnson during his early career.

The easement, which will be administered by the National Trust, protects the house from demolition and the property from subdivision in perpetuity. Additionally, certain alterations would require the review and approval of the National Trust, such as alterations to the exterior and parts of the interior of the House, any new structures, or changes to the landscape. While the house is still privately owned by the Gores family, future owners will also be bound by the easement’s terms.

“New Canaan’s unique architectural legacy is richly represented by homes such as the Landis and Pamela Gores House,” said Katherine Malone-France, Chief Preservation Officer at the National Trust for Historic Preservation. “It is critical that these homes of modern masters are protected, and it is an honor that the Gores Family has trusted our organization to ensure the long-term preservation of their family home.”

The Gores House is considered a successful synthesis of the International-style influences brought to America by Mies van der Rohe, Walter Gropius, and Marcel Breuer, and the natural, organic architecture envisioned by Frank Lloyd Wright. House + Home, in its 1952 cover feature on the Gores house, praised its two chief aspects: “It is modern because its plan is open and its spaces dynamic and bold; because its details are clean and simple; because it is intimately related to the landscape surrounding it; and because its many flat roofs and its large sheets of glass are of the technology of our time. It is traditional because it is a deliberate attempt to emphasize the permanence of "home" rather than the temporariness of industrialized shelter.” The Connecticut Chapter of the AIA awarded Gores an Award of Merit in 1964 for the residence, noting “Planned and built more than a decade ago, this house has become a classic example of the Wright tradition adapted to the environment of New England.”

“Growing up, I inevitably found our house more satisfying than any house I visited,” said the architect’s daughter Ainslie Gores Gilligan. “It was as solid as a monument yet it had freedom and grace. The giant glass walls of the living room felt suspended in space; I could sit warm by the fireplace and watch a snowstorm outside. Out or in, I had expanses for play. And when my sister wed, the house was entertainment space— scores of guests dined on the terrace as I ran to greet Philip Johnson, striding in across the meadow, an Andy Warhol array of Marilyn Monroes dangling under his arm.”

Born in Cincinnati, OH, in 1919, Landis Gores was educated at Princeton (Class of 1939, summa cum laude) and the Harvard Graduate School of Design, which at that time included among its faculty the Bauhaus emigrés Walter Gropius and Marcel Breuer. He graduated in 1942, winning the AIA Medal for that year’s top-ranking graduating student. Johnson, a fellow classmate of his at the Harvard Graduate School of Design, remembered Landis Gores as "the most brilliant student in my class.” Joining the U.S. Army, Gores served in top-secret code-breaking activities in England during World War II, for which he was honored by both his own and Allied governments. After the war, he was invited by his classmate Philip Johnson to join him in a tiny architectural office Johnson had set up in Manhattan. Gores oversaw most of Johnson’s projects and completed works from 1945 to 1951, and was given “associated” credit on seven early buildings, including the Rockefeller Town House (1950) and the Hodgson House (1951), another National Trust easement property. He worked closely with Johnson on the Glass House, drafting as many as 27 different approaches in the early part of the design phase.

Struck by polio in 1954, a few years after starting his own practice, Gores continued to design in spite of lasting physical limitations. His last residential work, in 1975-1977, was an early example of environmentally responsible and energy-conserving house design. He died in 1991. The redwood and glass structure he designed in 1960 as a pool house for the Irwin estate, now Irwin Park in New Canaan, is open to the public during limited hours and operated as the Gores Pavilion by the New Canaan Historical Society.

The Gores House is the second modern New Canaan residence this year to be protected by a conservation easement. In June of this year, the Noyes family and The Connecticut Trust for Historic Preservation signed an agreement to protect the “design intent” of Eliot Noyes’s award-winning and much-published Noyes II, the second New Canaan house designed by the architect for his family.

The Gores House is still a private home and not available for tours at this time. The National Trust owns and operates the Glass House (New Canaan, CT) and Farnsworth House (Plano, IL) among its portfolio of historic sites that welcome visitors looking to experience residential modern architecture similar to the Gores House.