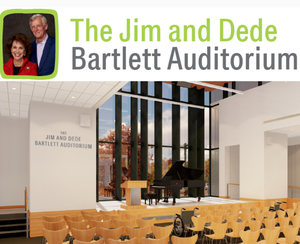 “Jim and Dede have been our partners from the beginning, offering their strong encouragement and support throughout,” notes Ellen Sullivan Crovatto, CEO of the Campaign for the NEW New Canaan Library. “Their incredible generosity accompanies an exemplary and unwavering fidelity to culture and civic life in New Canaan. The Jim and Dede Bartlett Auditorium will forever honor their exceptional leadership. We are so grateful for the tangible momentum it gives the Capital Campaign just as our new fundraising effort has begun.”

In addition, the Library will launch a new annual lecture series named for Dede Bartlett to honor women in leadership.

“New Canaan Library is the nexus of philanthropy, community and learning. This extraordinary gift demonstrates the power of this wonderful symbiosis and New Canaan’s culture of making the town ever better through the generosity of its residents,” said Lisa Oldham, Executive Director of New Canaan Library.

This gift is in addition to the Bartlett’s prior gift of $500K for the Rooftop Terrace, bringing their total support for the library project to $3.5 million. The $40 million Campaign has achieved $30 million in gifts and pledges thus far, including a $10 million grant from the Town of New Canaan.

“The NEW New Canaan Library will be the latest crown jewel in our town,” said Dede and Jim, “a vibrant community center where everyone can gather and enjoy an extraordinary array of exciting programs and events.”

Jim and Dede Bartlett have lived in New Canaan since 1976 and have been partners in work and life for 47 years. A former Fortune 25 executive with Mobil Corporation and Philip Morris Companies Inc., Dede Bartlett is co-chair of the New Canaan Abuse Prevention Partnership and a director of Legal Momentum: The Women’s Legal Defense and Education Fund. Known for her work helping survivors of domestic violence, she received the “Women Who Make a Difference” Award from the International Women’s Forum. She co-chairs the Jim and Dede Bartlett Foundation and has established internships in her parents’ names at Vassar College and New York University’s Tandon School of Engineering to encourage women to pursue degrees in mathematics, computer science and engineering. Dede is an honors graduate of Vassar and holds a master’s degree from New York University.

Jim Bartlett is a private investor and former mutual fund manager and the founder of investment partnership Bartlett Investors. He is co-chair of the Jim and Dede Bartlett Foundation and a champion of entrepreneurs, internships, and scholarships. He has supported over 50 college scholarships for STEM and economics majors in his father’s name at Boulder High School in Colorado. Jim earned a B.A. in economics from the University of Colorado, served in the United States Marine Corps and attended New York University Graduate School of Business, majoring in investments.

“We are incredibly honored to have earned this leadership level of support from Jim and Dede,” shares Bob Butman, President of the Library Board of Trustees. “This is a powerful vote of confidence in our team’s longtime vision for the project, one we hope will serve as an encouragement to others to join with us in support of this pivotal project as we seek to complete our remaining $10 million fundraising goal.”

The gift announcement was made public at the November 18th celebratory launch of the Library’s Campaign headquarters and public exhibit, New Canaan. New Library. New Chapter, which highlights plans for the new building, an event which was attended by donors, local town officials and supporters.

To learn more about the project and how to support the Capital Campaign, please visit www.newcanaannewlibrary.org or contact Ellen Sullivan Crovatto at (203) 594-5025 or This email address is being protected from spambots. You need JavaScript enabled to view it. .